Previously I described my involvement in the Krosno Branch of the Polish Association of Amateur Astronomers. Today I would like to carry on the subject of the associations of amateur astronomers arising about a different organization. I will not bring you the history and main contribution of the association, as I did before. Everything you find here is related to my personal experience arising out of my membership in the English organization of amateur astronomers.

I joined to Cambridge Astronomy Association in April 2015, just 2 months after I came to England. Despite my English, which was rusty I used to talk with one person, who said to me, that England possesses some nice observatories in the southern part of the country. I was in a few lectures about astronomy. During one of them, I heard about Nicolas Copernicus and Jan Heweliusz with his big telescope. Another lecture brought brief information with a photo of Collegium Maius in Cracow. It was a fantastic thing to hear about renowned people and places from my mother country. Aside from the lectures I had the occasion to take part in the summer solstice. Summer Solistice is the national event associated with the first day of summer when it is the longest day of the year. The biggest event used to be organized in Stonehenge. I saw the summer solstice on Sunday 20th June 2015. There were a few telescopes set on the Cambridge Astronomical Observatory ground and tens of people. Everyone had the opportunity to see the Sun. The weather wasn’t favorable, because a lot of patchy cumulus clouds were covering the sun. Fortunately, I saw the solar disk through one small telescope, that has Baader 5.0 filter installed. In my opinion, the best was a telescope with an H-alpha filter mounted. The Sun was clearly visible with all prominences, although our mother star wasn’t magnified a lot. Maybe it could look the same through typical binoculars, however, the H-alpha effect was marvelous. Due to the clouds, nobody could enjoy a great long view. The Sun was often veiled and fuzzy. In effect, the view was featureless with faint disk without sunspots, or Sun was completely gone for a long while. 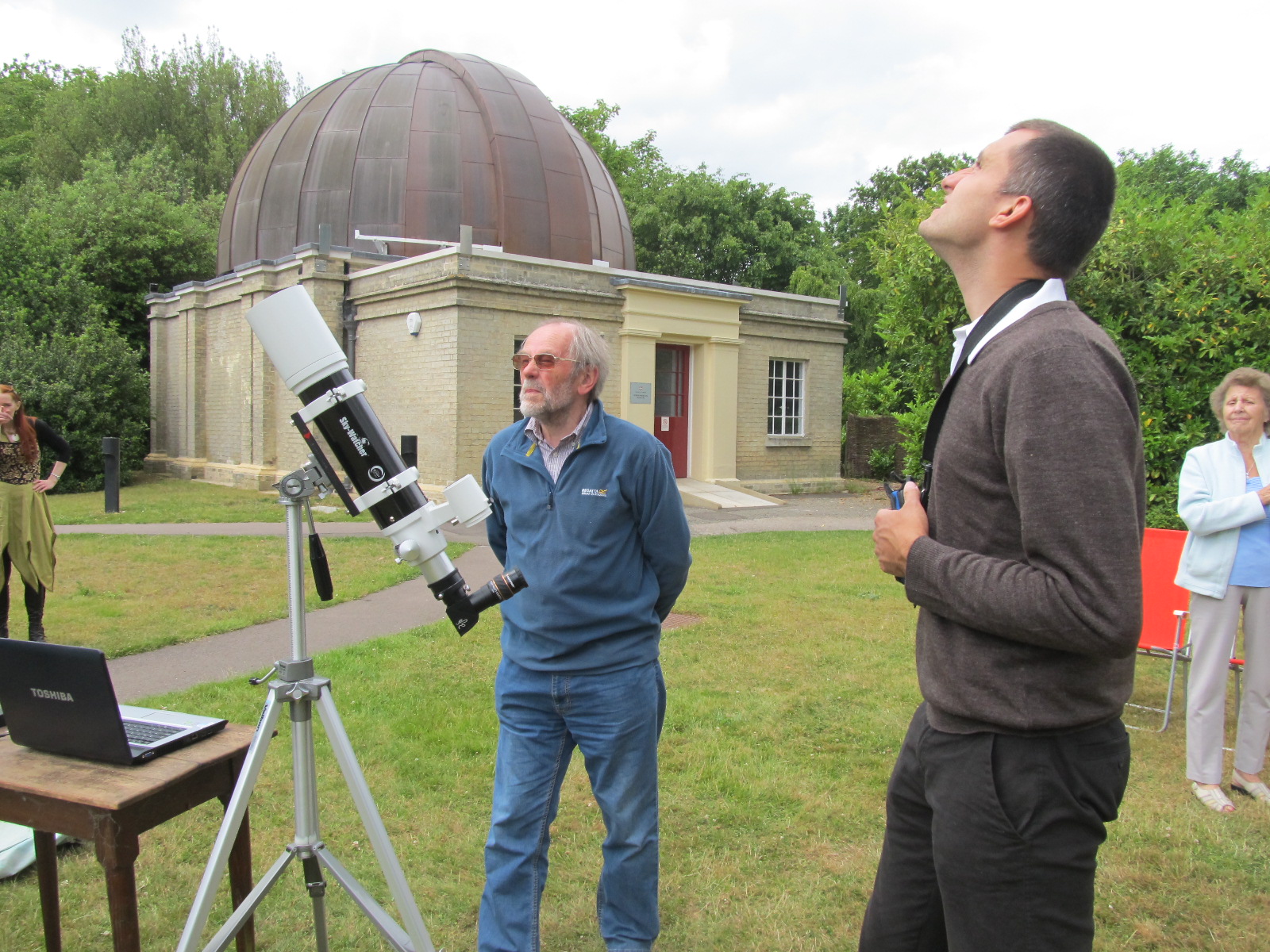 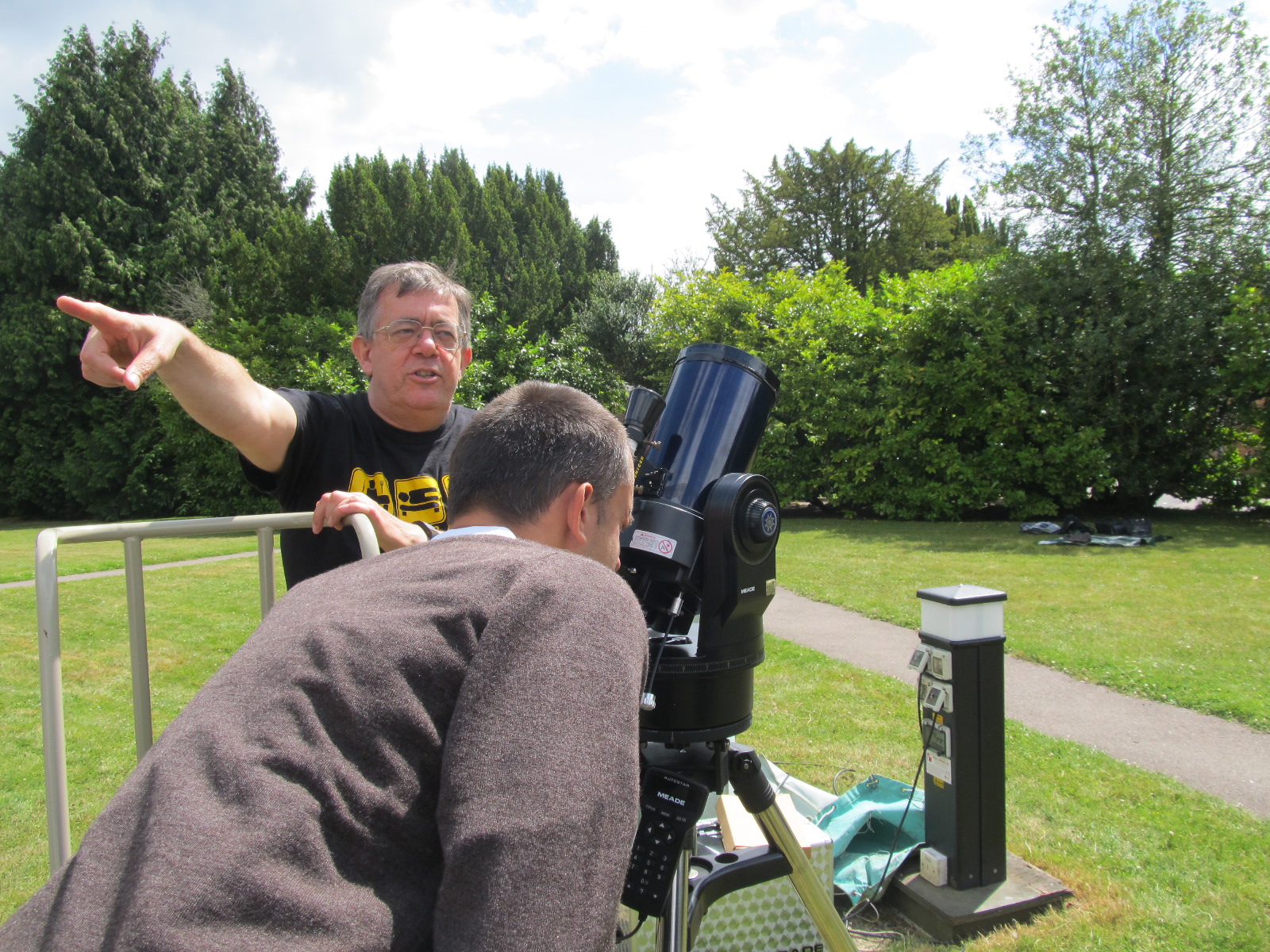 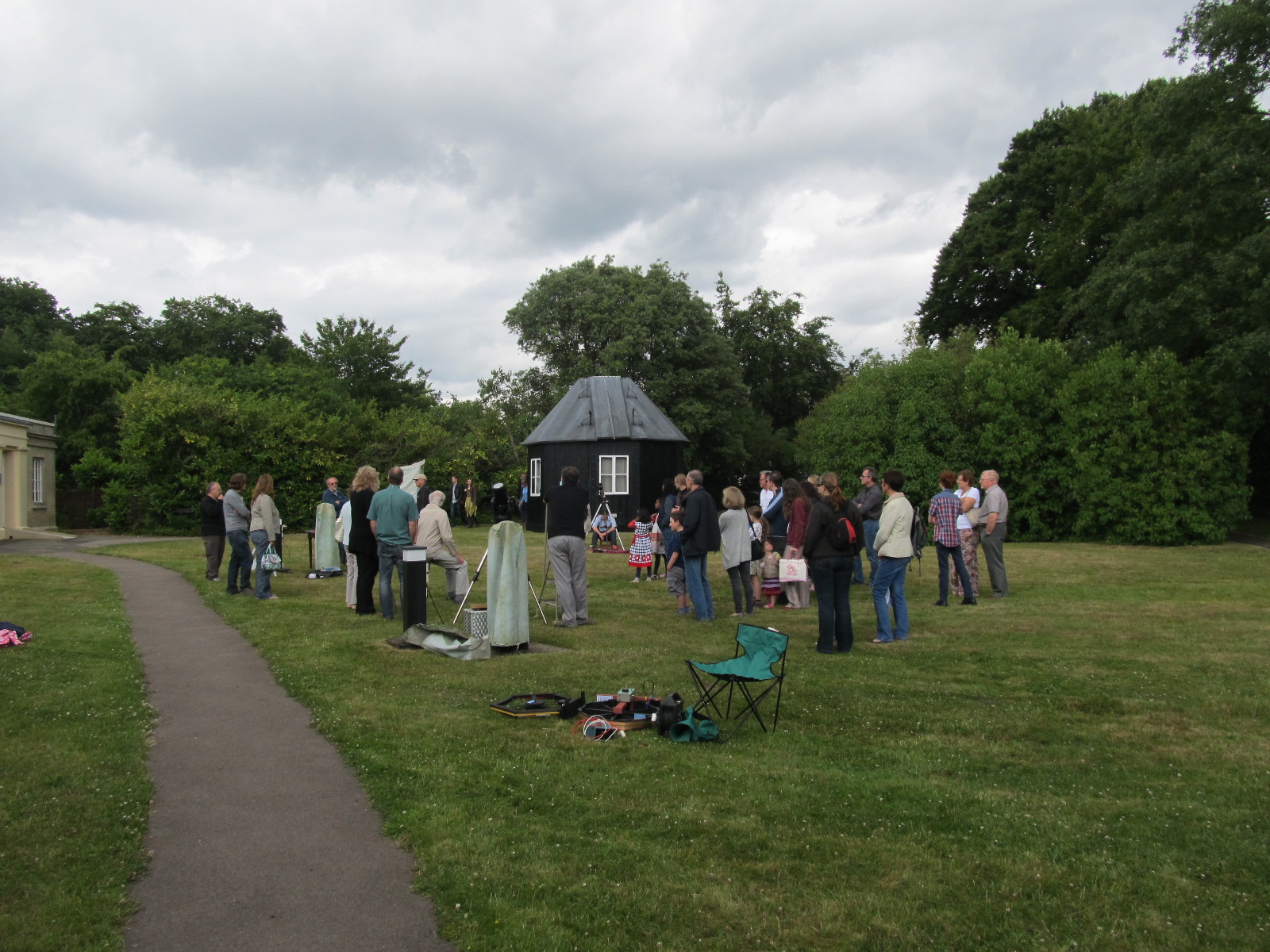 Pic. 3 The astronomical meetings in Cambridge always gather many people.

There are a lot of lectures, that take part at the Cambridge Astronomy Association. Many astronomical topics have been raised all the time likewise many amateur observations have been carried out, especially during the winter period. Lectures are taken by astronomy students, university staff, and external people. Usually, a lecture falls on the 3rd Friday of every month. It lasts around 1 hour. When I was for the first time I was really surprised to see allegedly more than 100 people. Unlike to Krosno branch of the Polish Association of Amateur Astronomers,, the frequency is more than excellent. Usually, there are no external guests during the meetings in Krosno except scholar staff from time to time. Krosno’s stuff is really poor because it counts 11 members only. Cambridge Astronomy Association is a big community with more than 300 people, and at least 50% of them attend the lectures & meetings regularly. Every lecture is announced in the newsletter issued every 2 months. This newsletter contains much other information also. Many of these are aimed at the popularization of Astronomy. 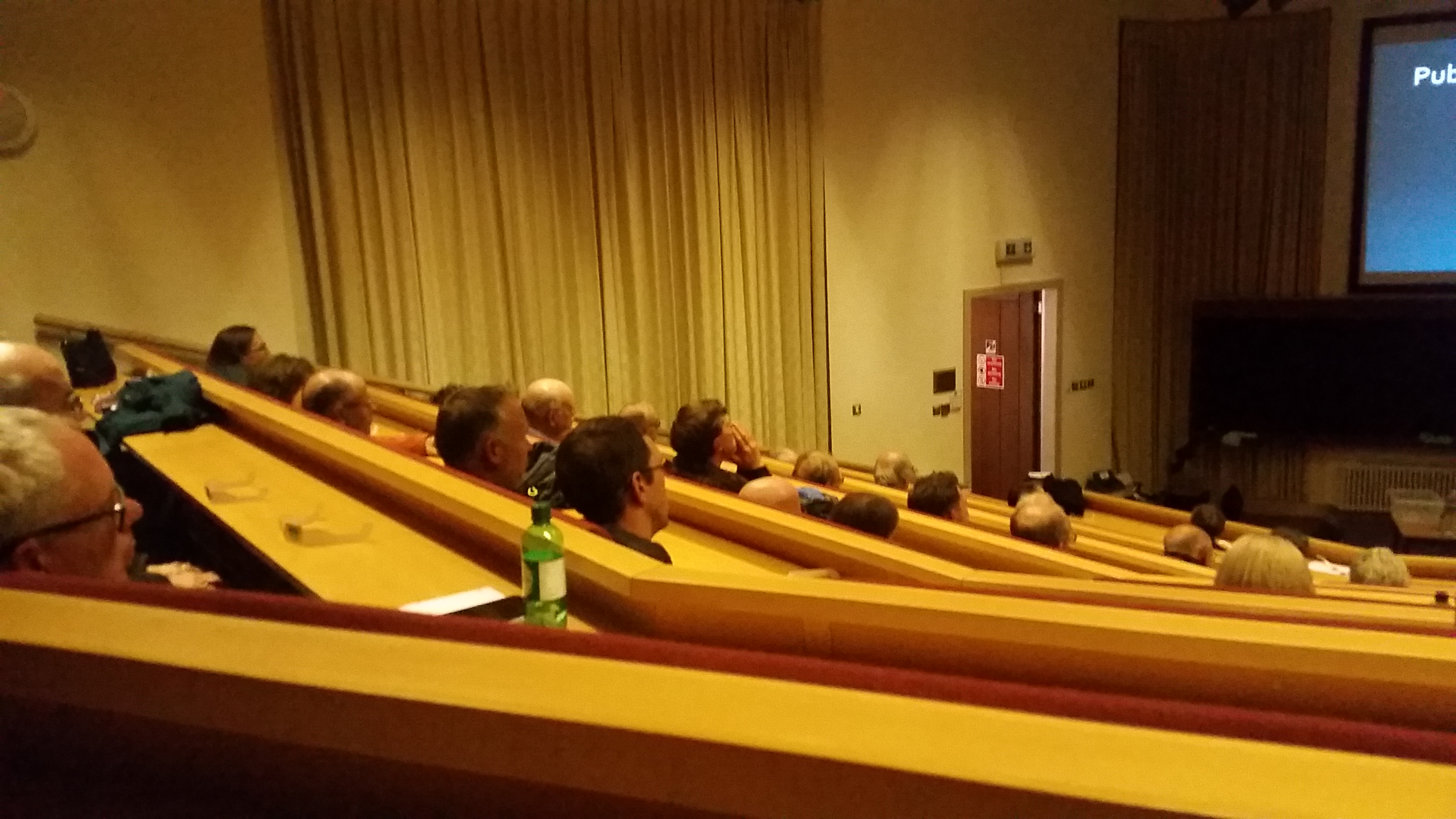 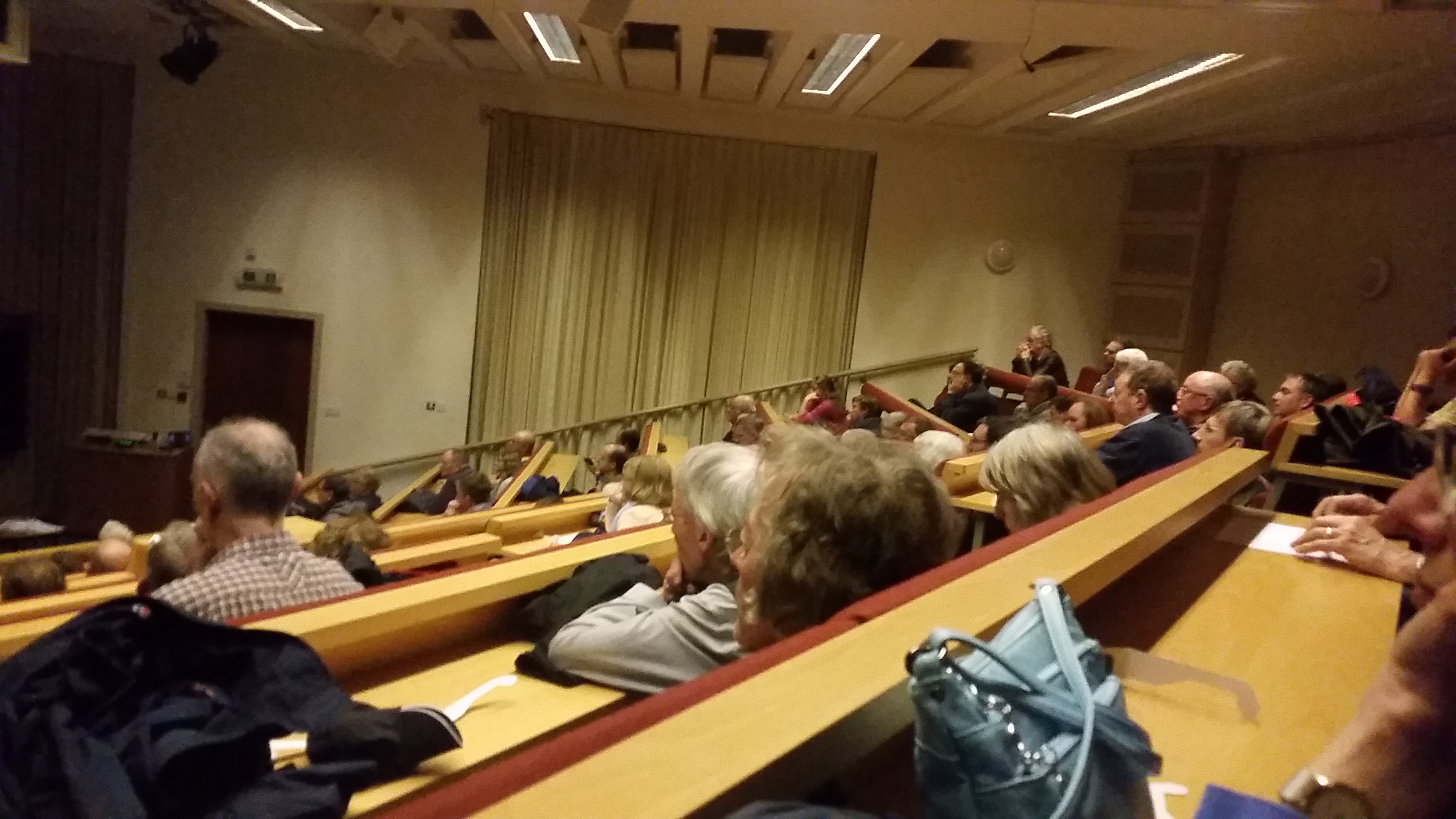 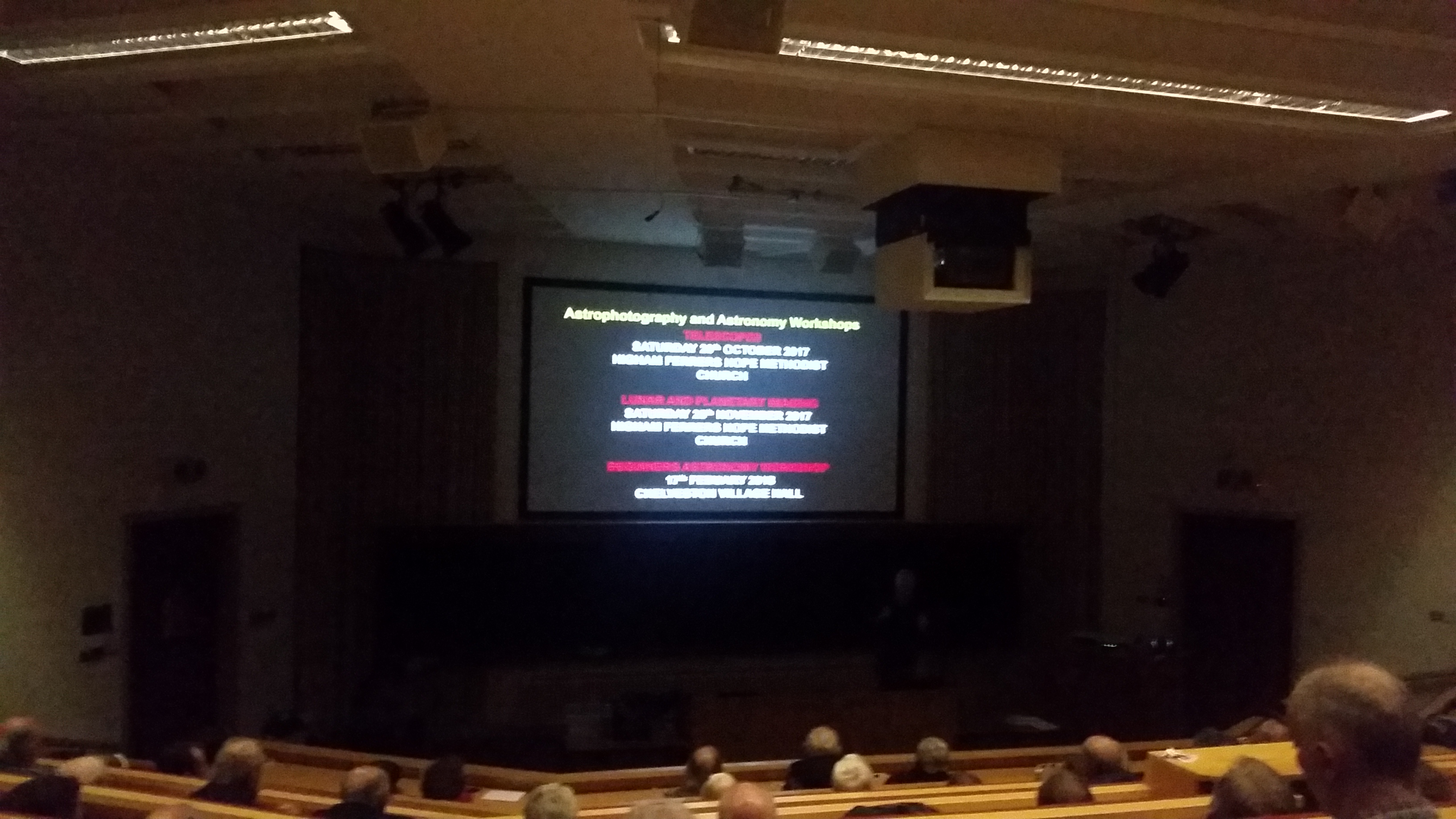 Pic. 4 – 6 Typical lecture (speaking) at Cambridge Astronomy Association. The hall in the Institute of Astronomy one of the largest departments of the University of Cambridge can host several hundred people. Usually more than 100 members during the CAA speeches.

After a few months of involvement, I had to leave the association, because I moved to Aylesbury more than a year. When I back in early 2017 to Cambridge I became an active member of the Cambridge Astronomy Association again. I started to attend the speeches and observations from time to time. Public amateur stargazing has been carried out during the winter period between October and March. This is the time when the day is short and early sunset allows us to see the stars. Due to high light pollution above the city center, the observer is able to see the most prominent constellations only. Hence those observations play the role of Cambridge Astronomical Observatory sightseeing. Always the scientific lecture takes part at the beginning with telescope experiences afterward. You must be patient because due to the big group of people  (even more than 200) there is a long queue for each object. Finally, you can watch the sky shortly through the telescope, that you selected. It’s good to participate in those observations several times and visit each telescope. I was fortunate to see all of them during one meeting. I spent over 2 hours getting everywhere. Through one of the telescopes, I could see a beautiful M42 nebula in Orion. I will remember this view for a long time. 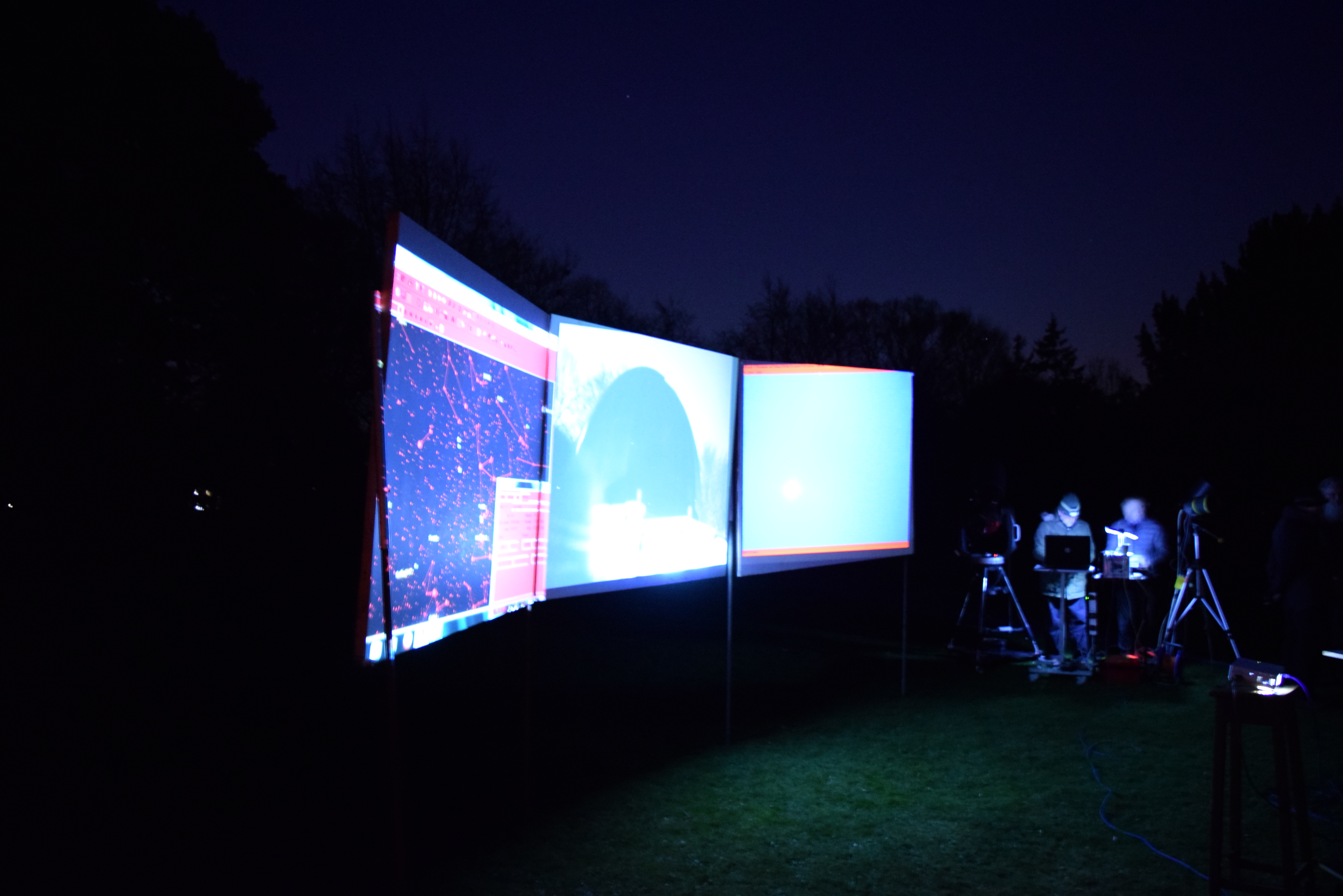 Pic. 7 The open-air equipment shows a live sky view both from the software and telescope. 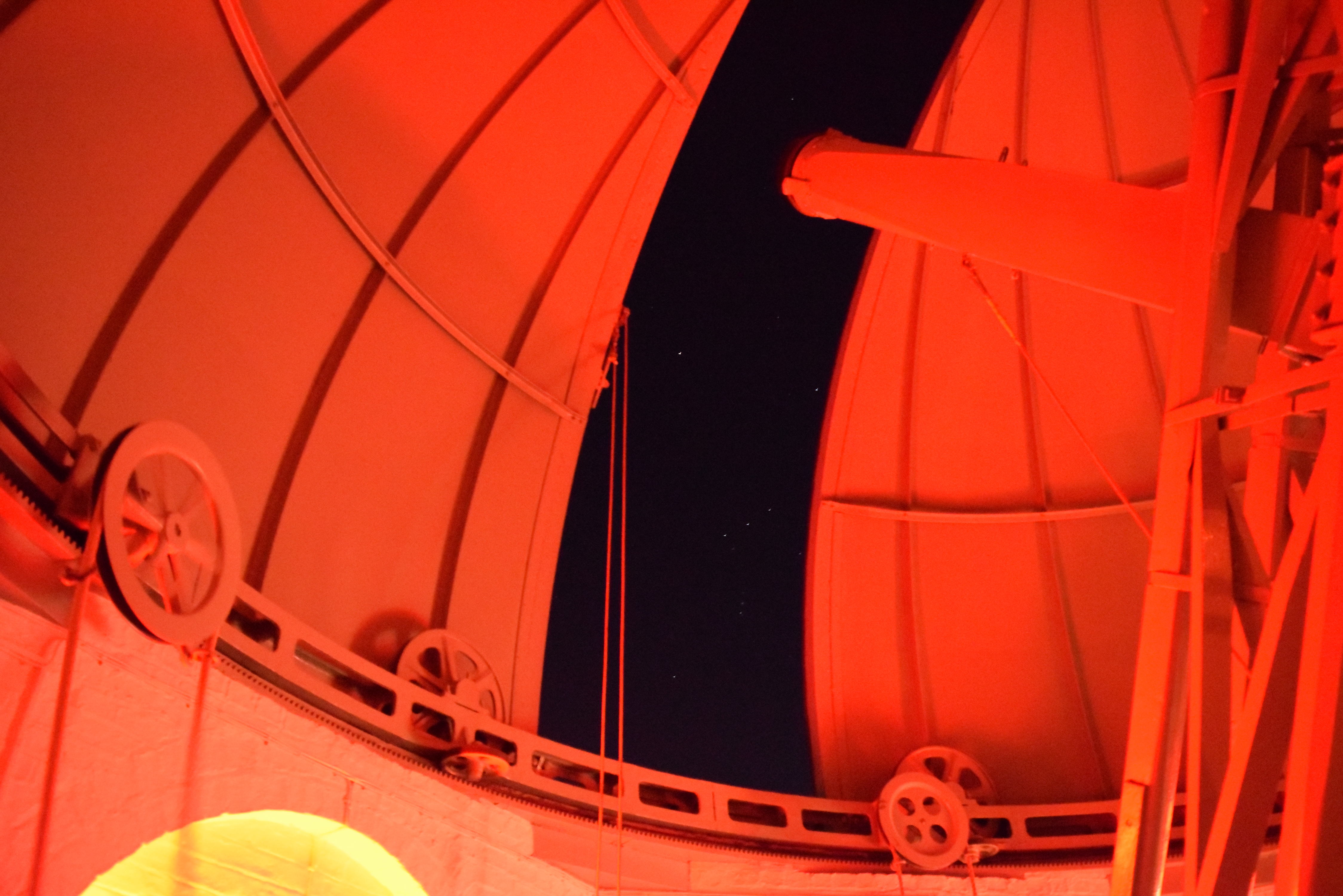 Pic. 8 Inside the Northumberland Telescope with the Orion constellation beyond. 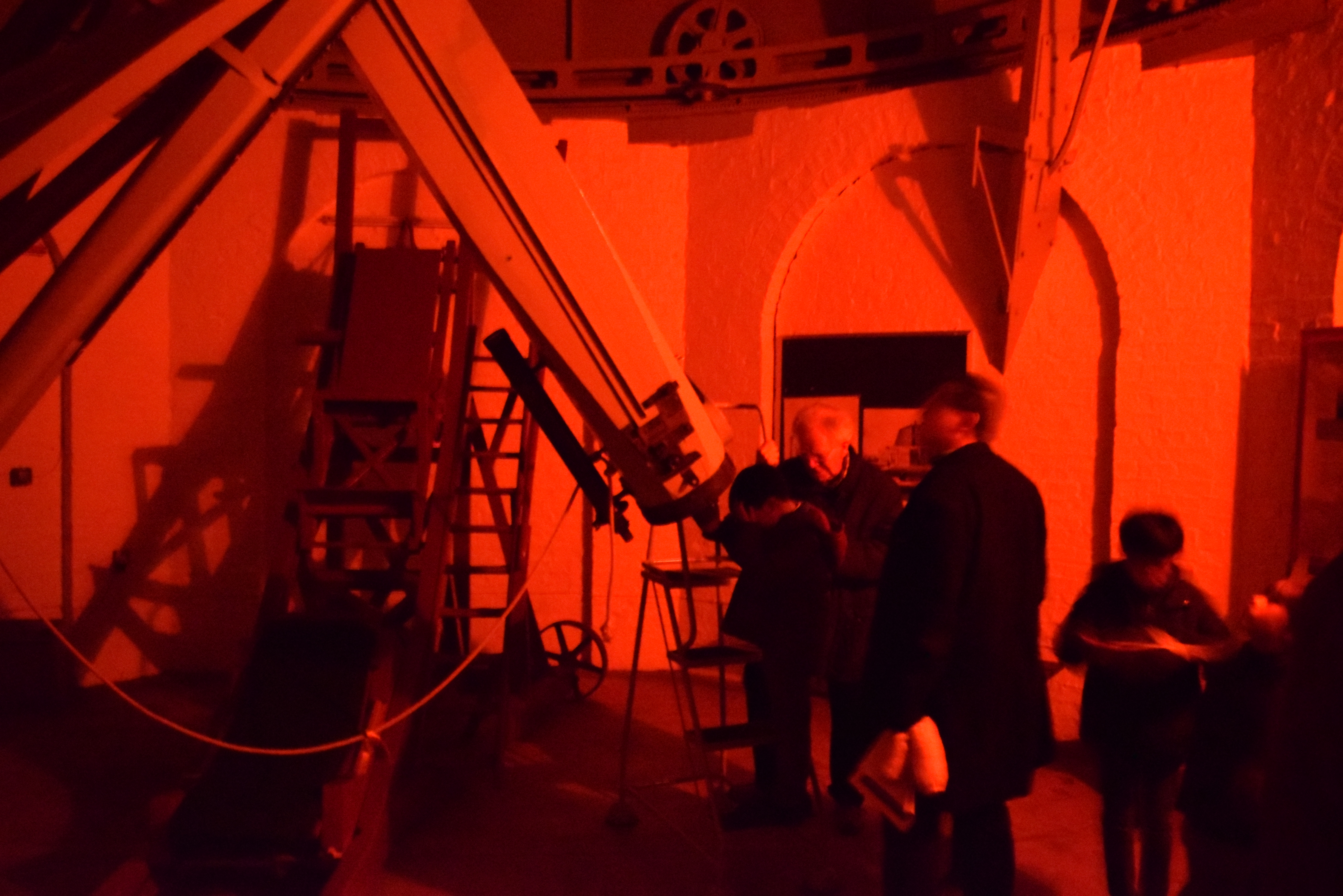 Pic. 9 The Northumberland Telescope during the moment of high demand. 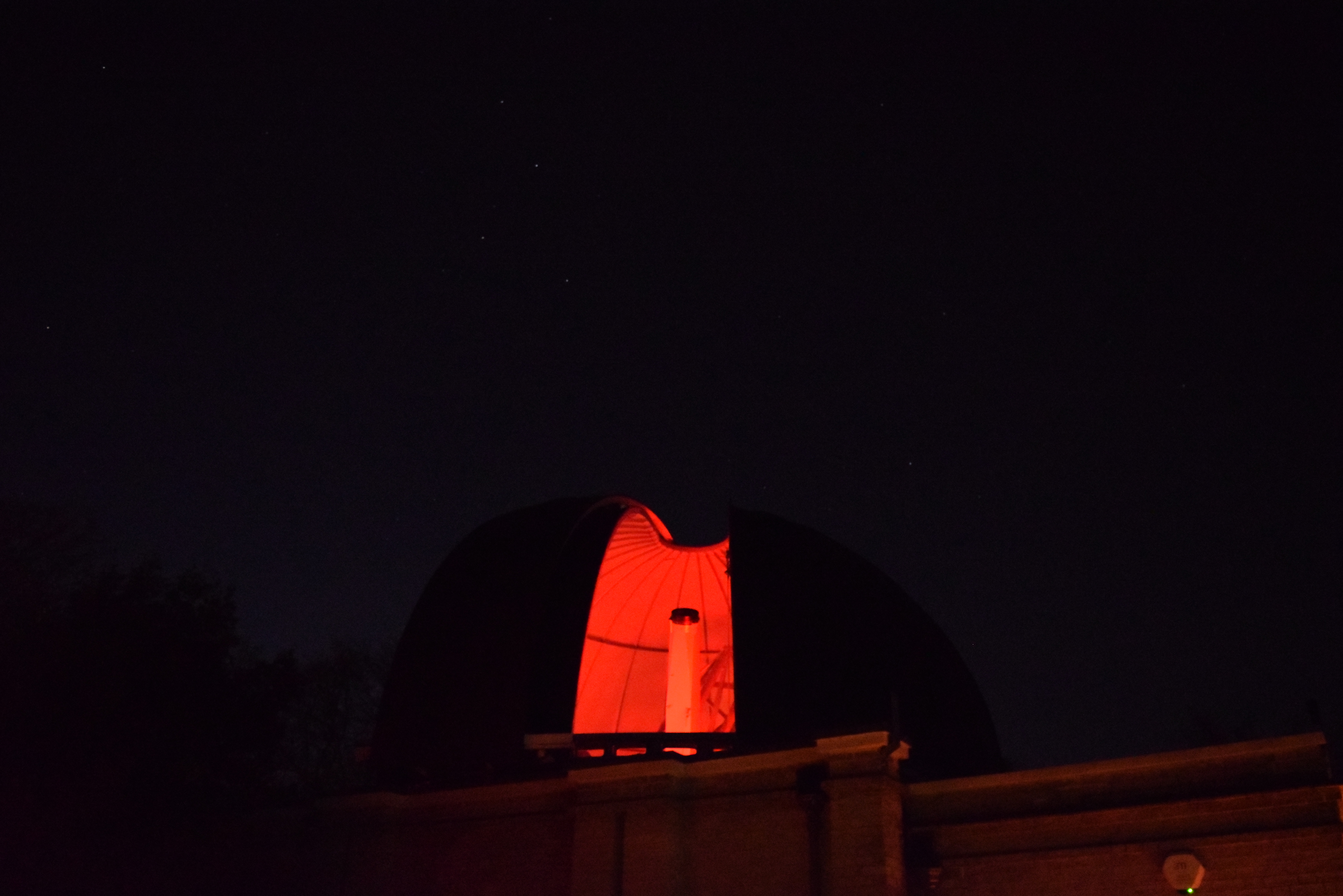 Pic. 10 The Northumberland Telescope dome from the outside. 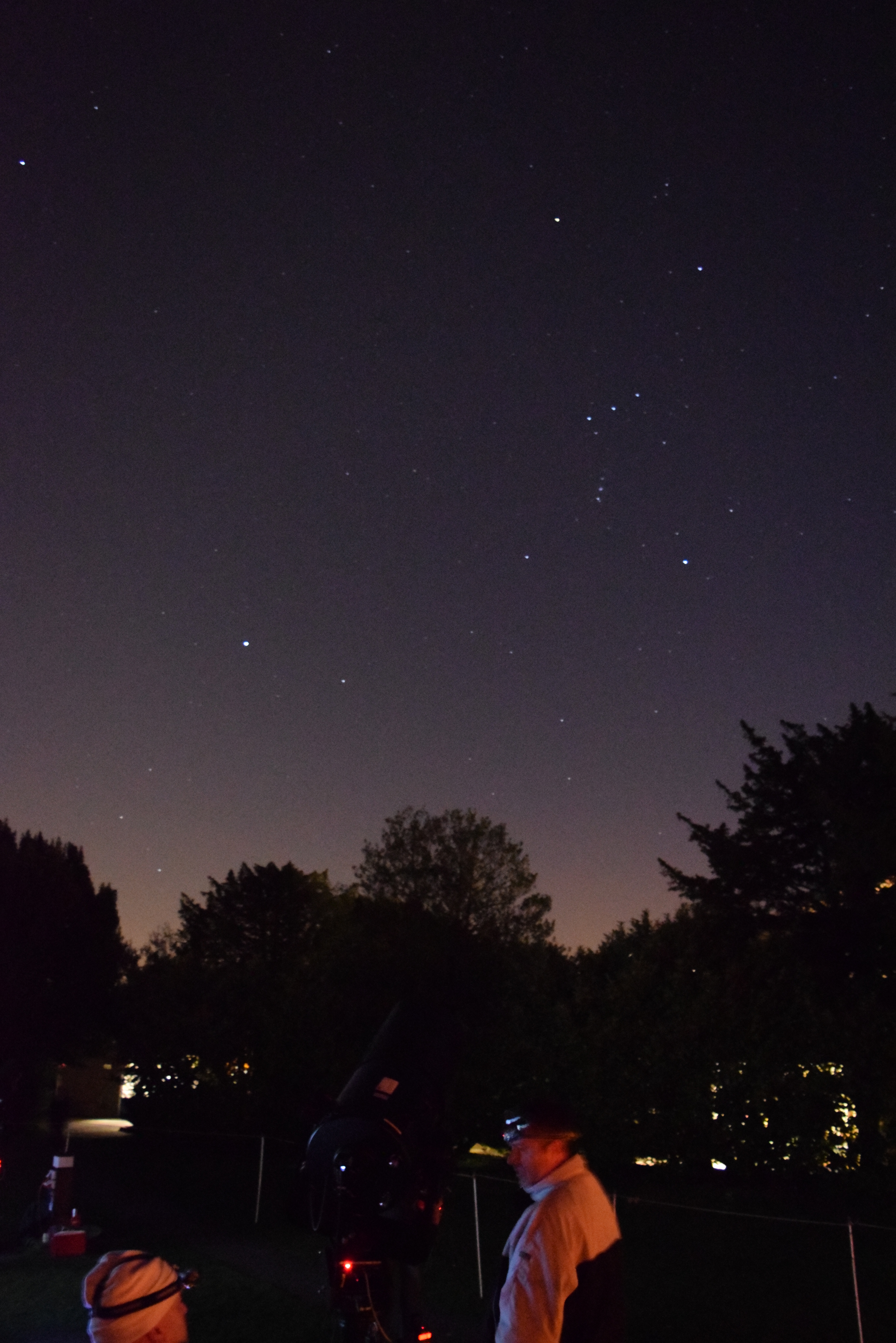 Pic. 11 The Orion and Canis Major constellations seen on 15th March 2017 from the Institute of Astronomy yard. 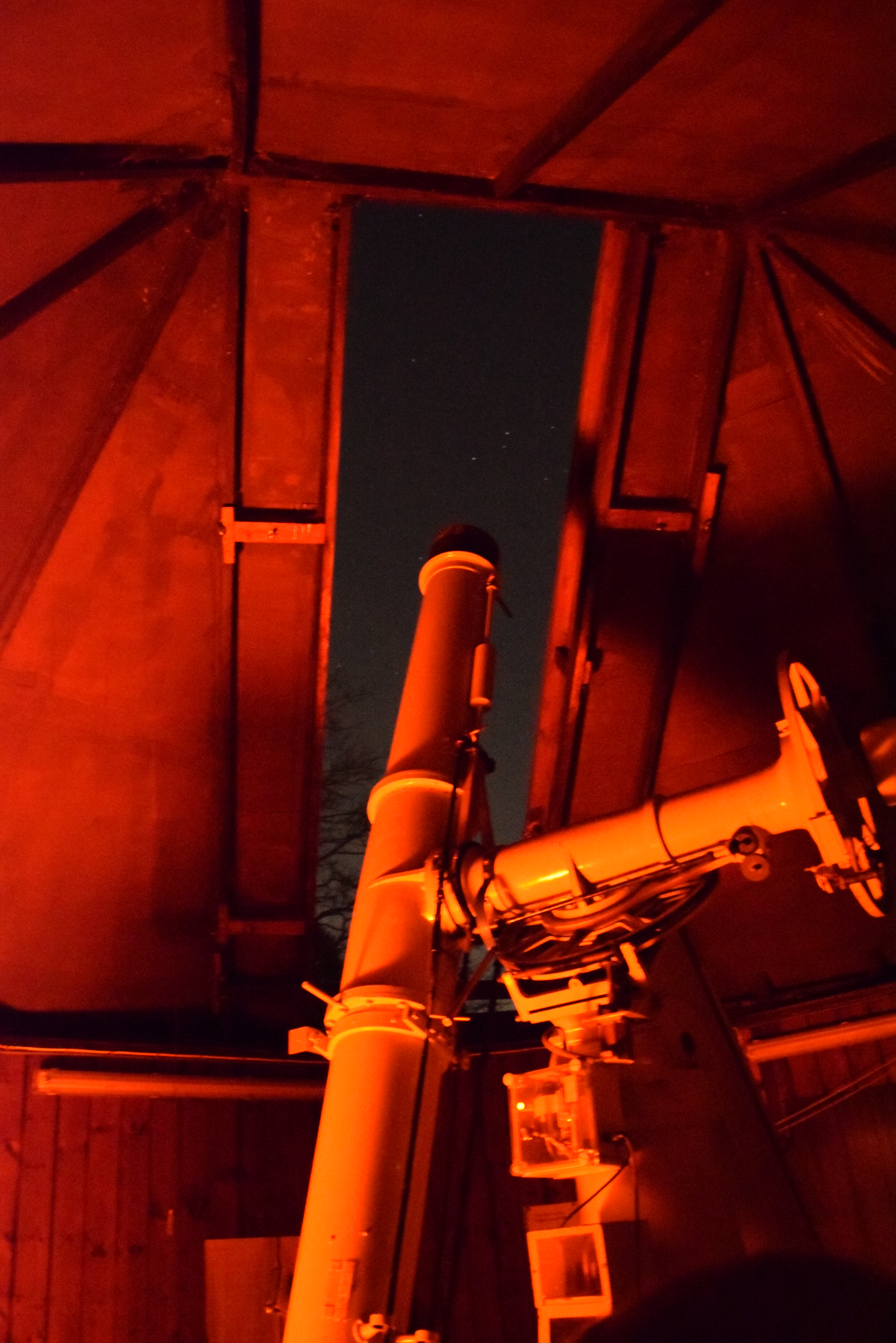 Pic. 12 The Thorrowgood Telescope headed on the Hydra constellation. 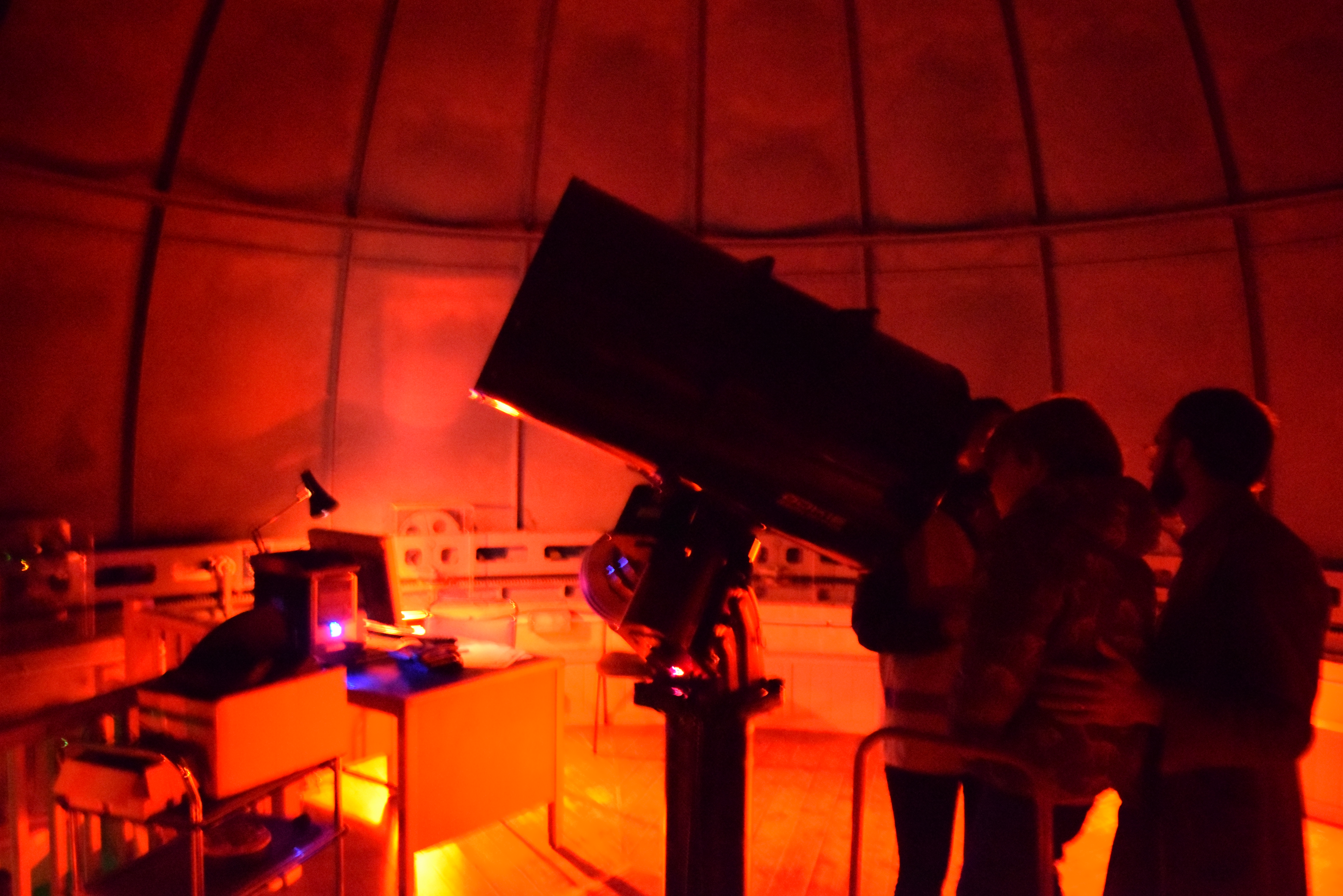 Pic. 13 The youngest observers of the night sky.

Watching the sky and listening to specialistic lectures with Cambridge Astronomy Association gave me a new overlook into amateur astronomy. It aware, that membership is definitely a good way to broaden my astronomical horizons and meet new people.