This is the second part of the article, explaining the great Venus orbit cycle, which repeats on average every 3159-3160 years. Reminding the basic mechanism it’s exactly 395 8-year cycles, where the planet back pretty much to the same place at the same time in the Sky, except the situation, where this moment in its orbit falls close to the nodes, mentioned before. These nodes were roughly explained, when considering the transits of Venus, however, it’s good to know, that they refer to the Venus orbit itself either.

As a continuation of the current discussion I would like to focus now on another great Venus orbit cycle, which happens along with the previous one, described earlier. This is the great Venus orbit cycle for descending-node transits, which has its beginning and the end at the May-June Venus transit.
As was indicated previously, the good celestial counterpart to the conjunction with the Pleiades is the coincidence of Venus’s orbit with the Antares star – the brightest one in the Scorpius constellation. These two conjunctions feature such opposite circumstances. Whereas the first one with the Pleiades is repeatable for a long time (basically more than 40 years in a row), the meeting with Antares doesn’t last longer than 2 or maybe 3 moments every 8 years. Anyhow, the Antares star is located in the interesting part of our galaxy, close to a few interesting objects like NGC 6144 or M4 (NGC 6121), which means that the timespan of 8 years cycle Venus appearance must be considered as longer (Pic. 1). 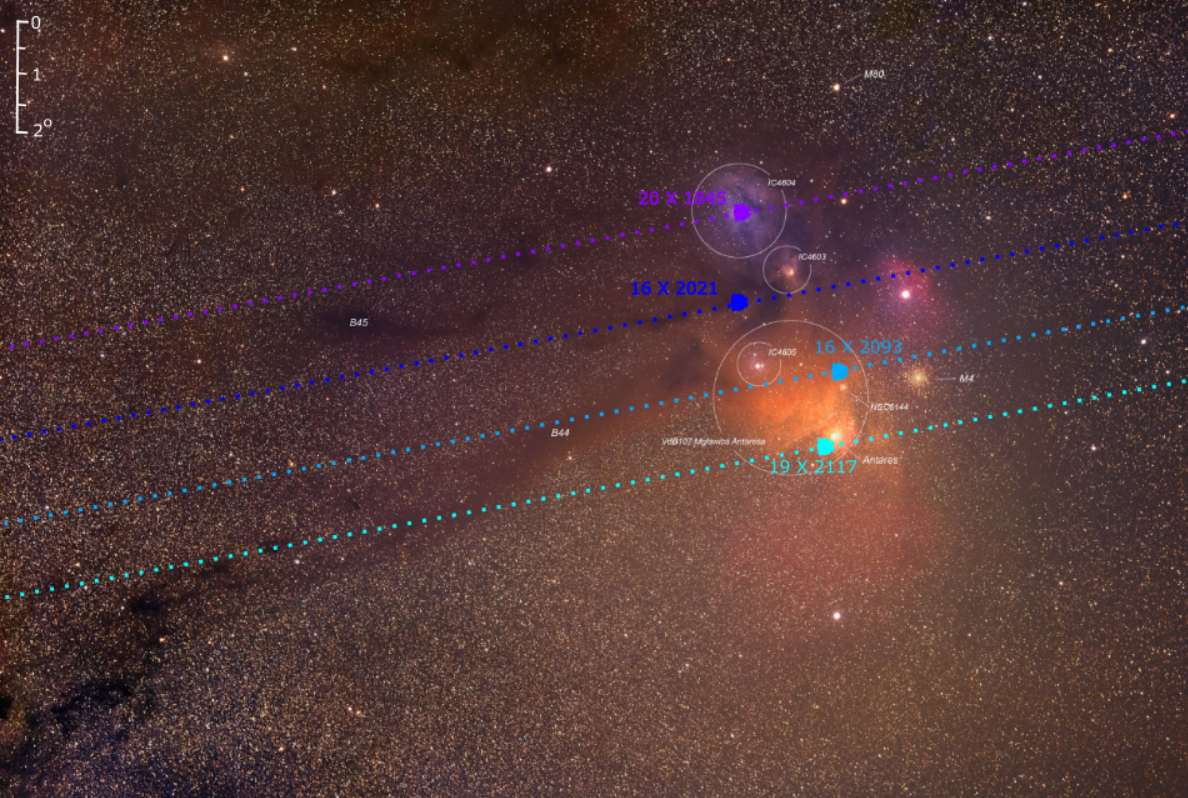 Pic. 1 The celestial area with Antares (the brightest at the bottom) and other interesting objects like Meisser 4 or Meisser 80. The Venus orbit paths between 1845 and 2117 have overlapped with this image. Background image credits: Mariusz Świętnicki. Click to enlarge.

The Scorpius and Ophiuchus constellations border abounds with clusters and nebulae. The area of the biggest congestion of these celestial bodies stretches on nearly 4 arc degrees. Thereby Venus passes them a multitude of times throughout nearly 3 centuries. The image shows only 4 exemplar paths between 1845 and 2117. As the orbit “moves down” it changes the path faster, because is getting closer to the minimum inclination. Finally, on November 2, 2165, Venus will reach this point vis-a-vis Antares (Pic. 4). The most interesting moment for us is shown by the blue line – Venus path near the IC 4603 reflection nebula in Ophiuchus. It will happen soon, in October 2021, and then repeat a bit further in October 2029. In the 2060s and 2070s, Venus will meet closely with the IC 4605. Finally, in 2117 the second planet will pass very close to Antares, merely 1,5 arcminute south of this star (Pic. 2), likewise south of the Merope star in 2028. 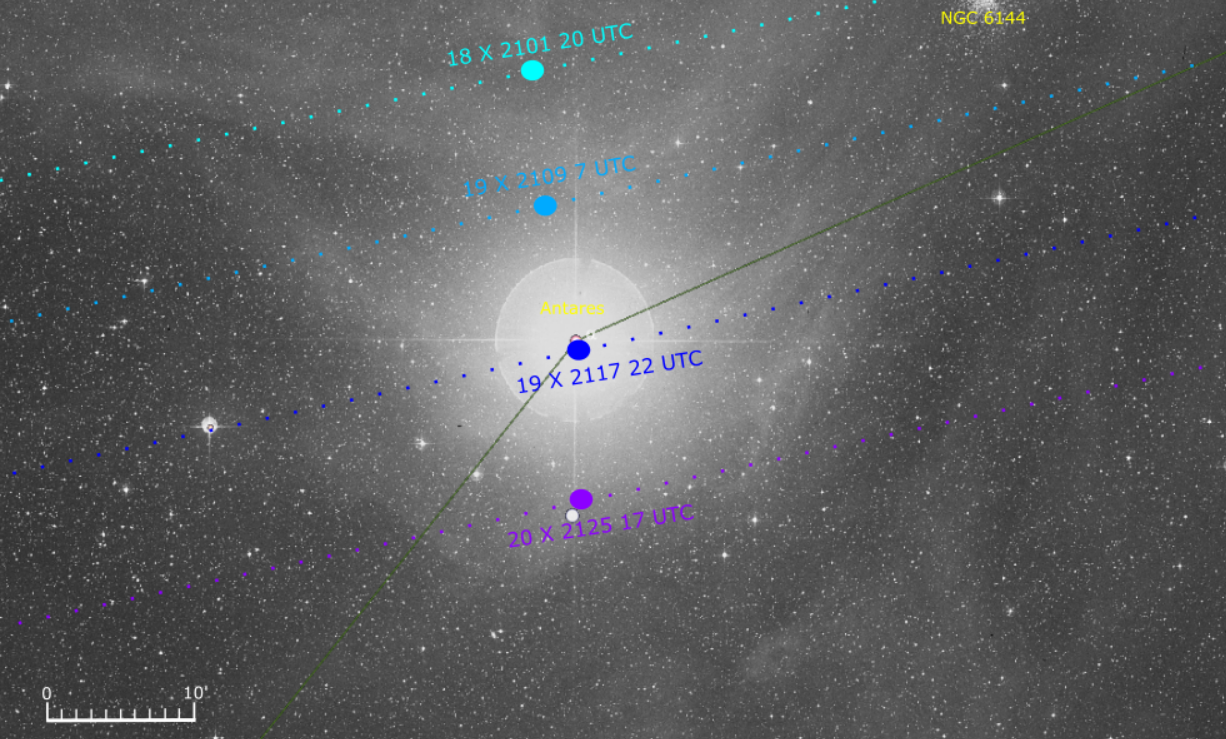 Pic. 2 Venus path near Antares with the biggest conjunction in 2117, a few weeks before the ascending-node transit in December. Based on Cartes du Ciel Sky Charts 4.  Click to enlarge.

Venus in favorable conditions can even occult Antares. The last occultation took place in BC 525 and the following one will happen in 2400. They are not related to the current orbit cycle, which we are discussing, because one of them occurred on September 17, and another one will fall on November 17.
Returning to the discussing great Venus orbit cycle we must be aware of the declination of Antares, which is about -26,5 arc degrees. The ecliptic runs at around -23 degrees. It leads us to the conclusion, that conjunction with Venus must happen nearby to its minimum orbit inclination. Following the pattern, showing 3 separate great Venus orbit cycles, divided by 243 years from each other (Pic. 3) we can see when it happens. 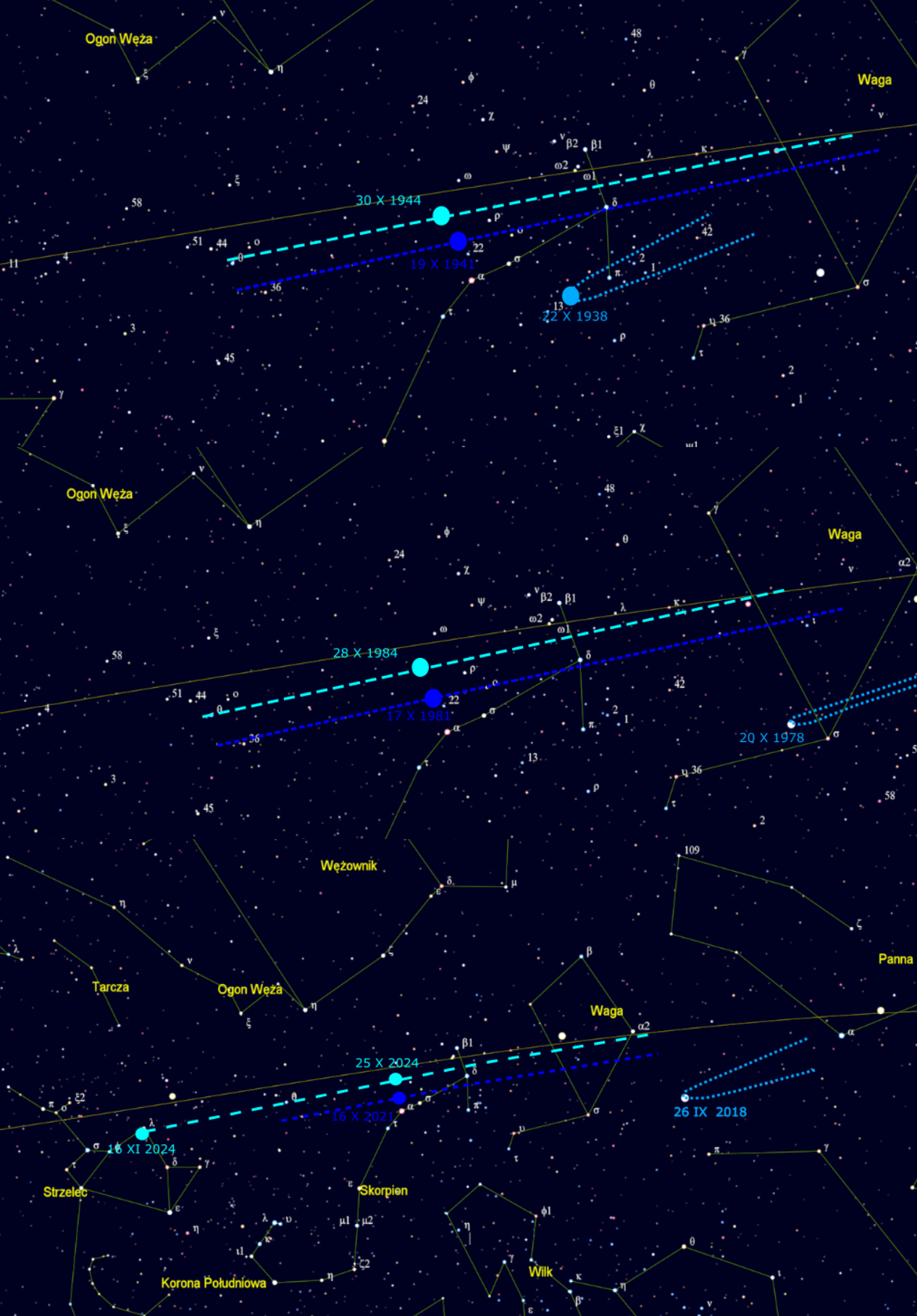 Pic. 3 The 3 separate Venus orbit patterns in the Scorpius constellation or nearby. The timespan between each other is exactly 243 years, which points to the standard Venus cycle. The circumstances were repeated every 40 years (5×8 years periods). Cartes du Ciel Sky Charts 4. Click to enlarge.

Basically, the Venus orbit will reach the minimum inclination “shortly” after the great conjunction with Antares in 2117. The year 2165 indicates the moment when Venus goes close to the brightest star in Scorpius and retreats afterward toward the Libra constellation. It’s just over 550 years before ending this great cycle (Pic. 4).

Pic. 5 The inferior conjunction of Venus with the Sun preceding the almost central descending-node transit in BC 427 and the first descending-node transit in 2733 (from 2733 and 2741 pair of transits) enclosing the 3168 years lasting great Venus orbit cycle. The faint blue arrow shows the direction of Venus’s movement against the Sun. Cartes du Ciel Sky Charts 4. Click to enlarge.

The angular difference between the inferior conjunction in BC 435 and transit in 2733 is about 4 arc minutes. As you can see it’s a lot, enough for transit, which wouldn’t take place. Venus misses the solar disk in the vicinity. Unlike the ascending-node transits described previously, there was no grazing transit observed across the world.
Both ambiguities with these transit counterparts presented as well as the rough period of the great Venus orbit cycle leads to the assumption, that they can repeat after a much longer period of time. Fred Espenak’s calculations cover “only” the 6000 years period, where we can analyze the one great Venus orbit cycle effectively both for ascending and descending nodes. Now, we know that both of them aren’t equal to each other. They might count around 3152, 3159, 3160, or even 3168 years because certain transit dates vary within a few weeks. Another curious thing is, that these great orbit cycles are not “divided’ by equal half marked by the exterior conjunction of Venus with the Sun. The second part of this great cycle, where Venus’s orbit reaches its maximum inclination usually lasts shorter, than the first one. It requires further explanation, why it happens this way as well as why the counterpart transits are not exactly the same. One of the hints here can be the fact cited in the previous article, that the 8-year resonance between these 2 planets is not exact and counts roughly 7,997 years, pushing the passage points away from the nodes over the hundred years.  The 3159-3160 years period counts exactly 13 of the 243 Venus cycles, which we could convince seeing these separate “lines” on the sky map. These differences between each separate great orbit cycle mean that they change slightly for sure, the best sign is nonuniformity of transit circumstances (Pic. 5). However, these divagations are not needed really, because of Earth’s orbit precession, which eventually changes the Venus path appearance against the celestial objects discussed in this work.