Stellarium is a free open-source planetarium, which can be used in different ways. The primary software is dedicated to your computer, but you can still work with Stellarium by using it both via a web application (Stellarium-web.org) as well as an Android application (Stellarium Mobile). Within this second one, there are also another two ways of use, as you can have a free or premium version.
It sounds a lot, I know. Stellarium is a quite robust software, in turn, you can use it elsewhere. However, we should point out the basic difference between the computer (or alternatively Android premium) version and the web-based version. The first streaking difference, which is sometimes troublesome is no option to change your horizon. Since the main Stellarium program allows you to play with the horizon by changing the existing ones or providing your own horizon patterns, sometimes really useful for checking the rises or sets of celestial objects from the given location, the Stellarium web doesn’t have this option at all. Nor the Stellarium Mobile Free App does. Unlike the horizon, there might be other important things not working correctly in the Stellarium web. Some of the users pointed out the corrupted option of saving the selected location. It’s the problem, which personally wasn’t applied to me, although I can admit, that the location selection in this application is really poor.
The location selection tool is based on the Leaflet OpenStreetMap interface, which enables us to find the place by address.
It’s a convenient option for sure unless you don’t know the cities in the country or area you want to check. The map canvas shows the place names in local languages (and alphabets), which might be inconvenient (Pic. 1). 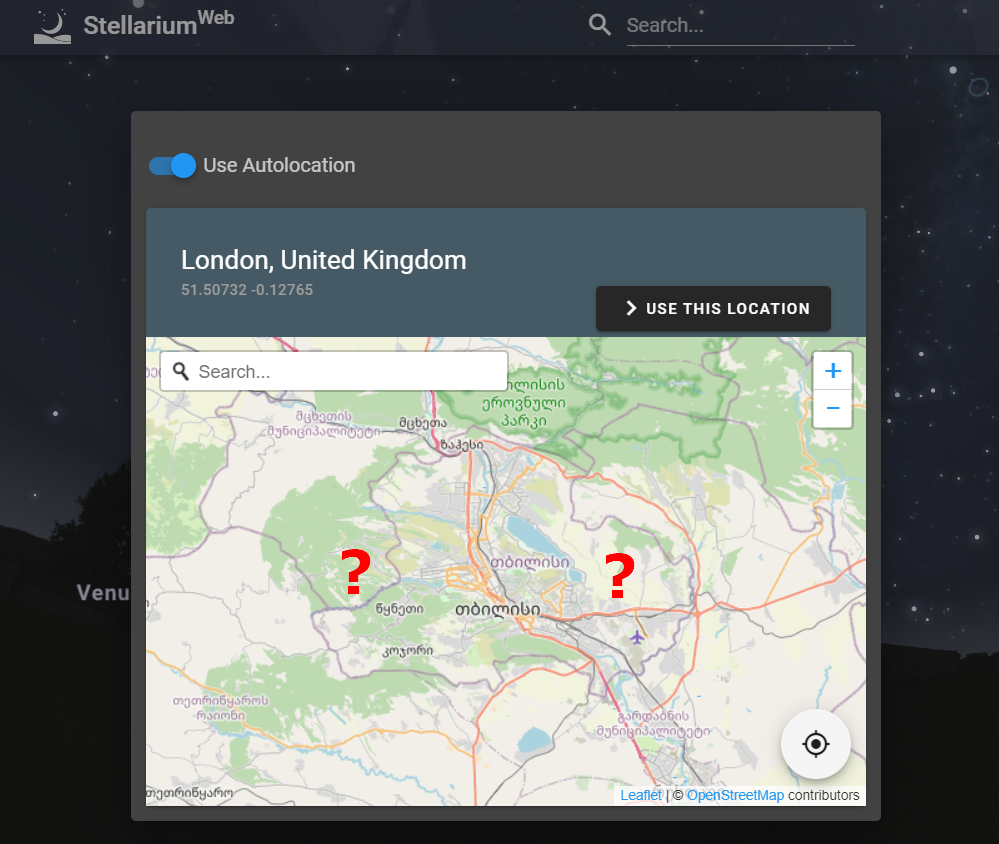 Pic. 1 The location search tool in Stellarium-web has deprived the place name translator. In turn, we are getting the names in local languages and alphabets, making our selection difficult.

There should be an option for selecting the place by clicking somewhere instead of selecting an address. In sparsely populated regions it’s a big problem to define the observation circumstances for the place you really desire.

Another inconsistency might appear within the stars libraries, which are more developed in the desktop version. It applies usually to stars not visible to the naked eye.
The worst thing is the inaccuracy! Both mobile and app (free) versions have significant mismatches with their calculations. They come out especially when you want to check the area of the sky with a small FOV. For instance, if you are checking some great conjunction of two bodies, you can “discover”, that the difference between the Web and Desktop versions might reach as much as 10″. It seems to be nothing, for sure if you deal with major conjunctions or planet configurations visible in the sky. Unfortunately, it’s a huge discrepancy, if you want to model some occultations. I personally experienced a really frustrating situation. I confided in Stellarium-web and haven’t compared its computation to other sources. As a result, I spot the transit of Mercury across Saturn’s disk on September 15, 2037. Both Stellarium Web and Stellarium Mobile Free calculate the transit, as you can see below:

Pic. 1 The occultation of Saturn by Mercury on September 16, 2037 morning [local time] in Norilsk [Russia] according to the Stellarium-web.org platform.

Pic. 2 The transit of Mercury across Saturn’s disk calculated from Spitsbergen (yet below the horizon) according to Stellarium Mobile Free.

Whereas the situation is different. In fact, the conjunction between Mercury and Saturn this day will be the greatest between Solar System planets since the last occultation which occurred on January 3rd1818, when Venus transitted across Jupiter’s disk.
Since 1818 this is admittedly the only conjunction of planets, where two bodies will be closer than 5 arcsec to each other until 2065 when the next occultation of planets will occur. The smallest separation on September 15th, 2037 will be about 1,8 arcsec. Unfortunately, the Stellarium-web, as well as Stellarium Mobile Free, is not accurate enough in cases like this. 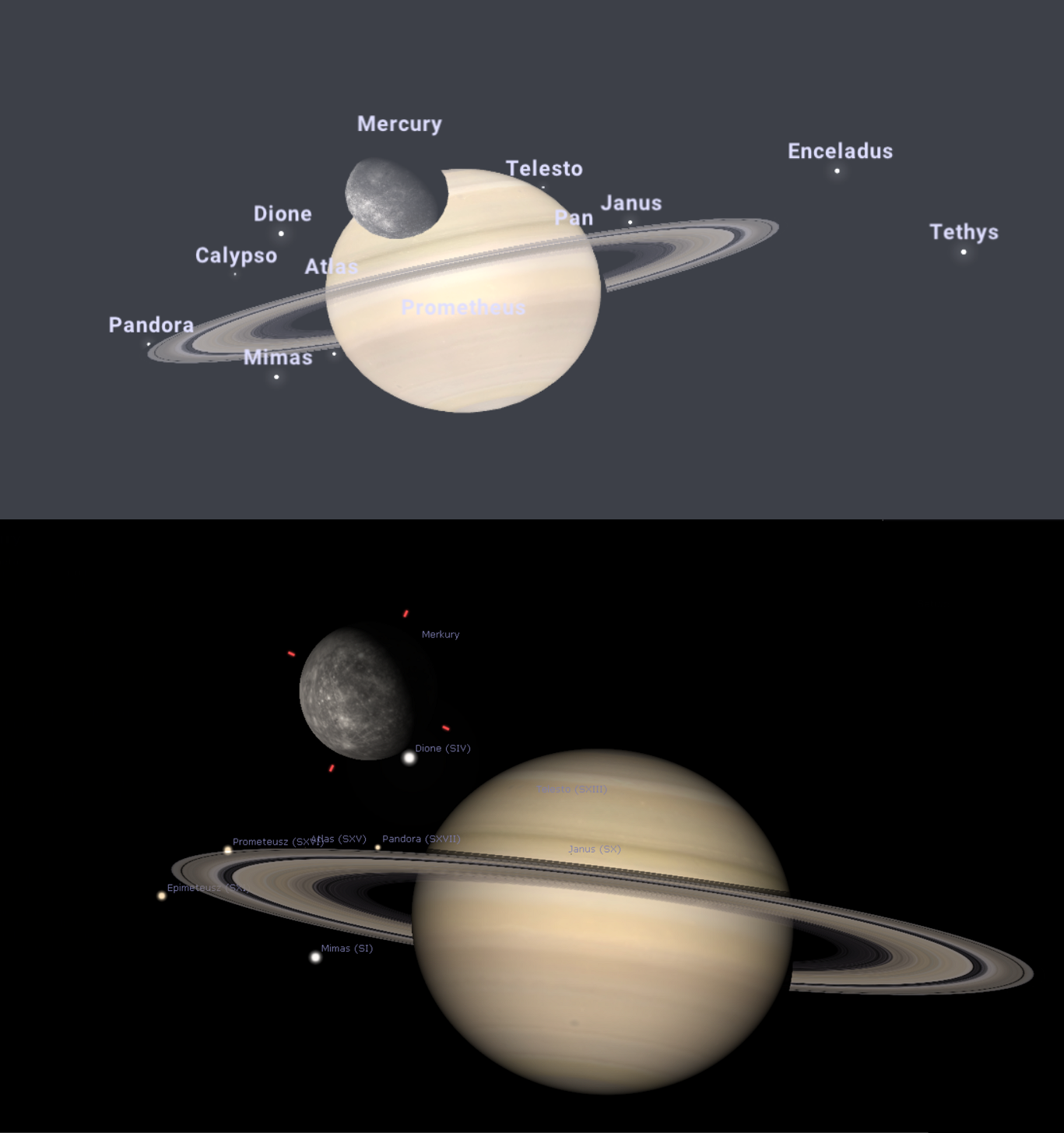 Pic. 3 The calculation discrepancy between Stellarium Web and Stellarium desktop (i.e. version 0.20) is clearly visible in cases like this. There is no transit of Mercury across Saturn’s disk at all! 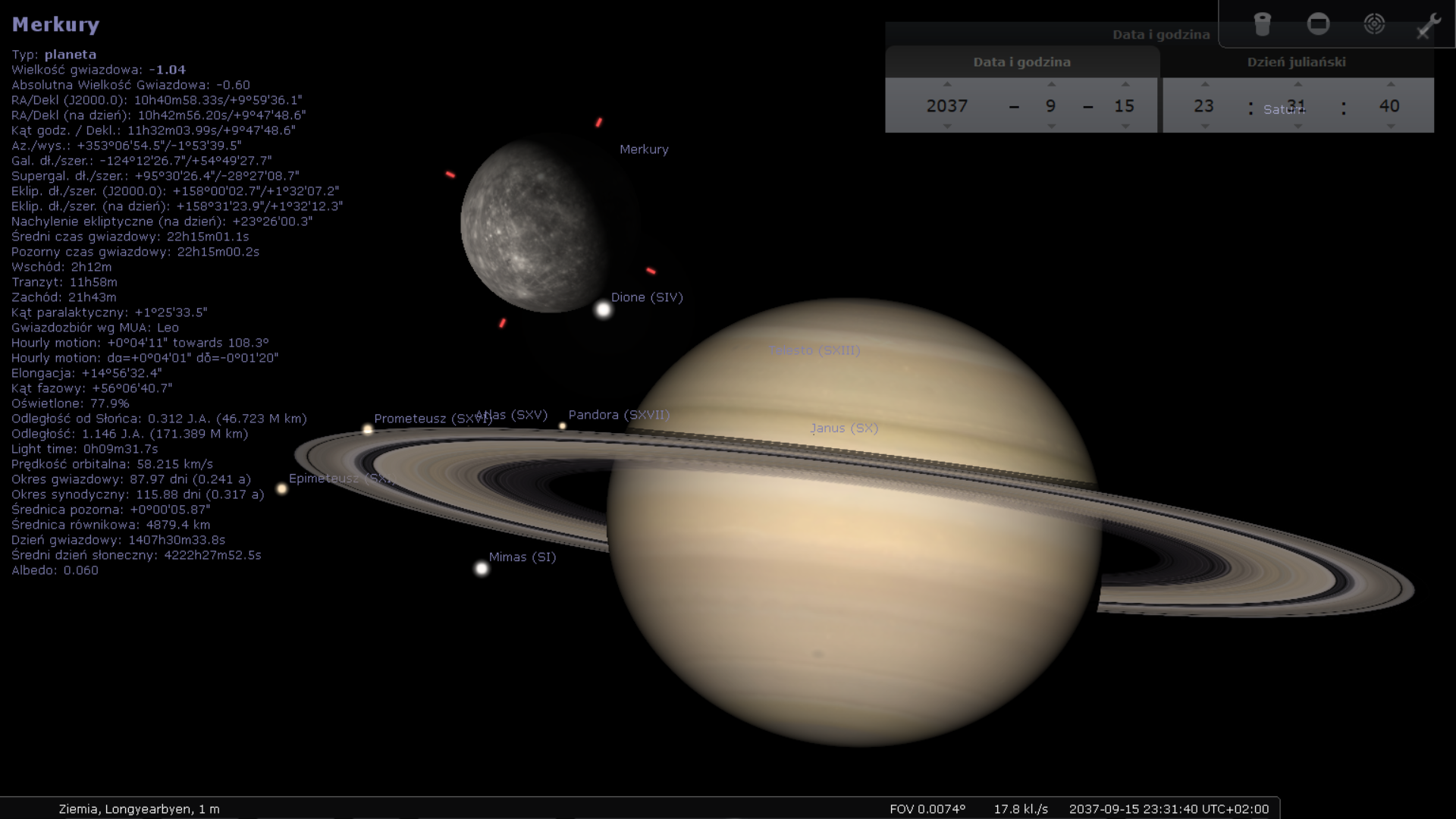 Pic. 4 The true circumstances of the Great conjunction between Saturn and Mercury on September 15th, 2037.

Just for the sake of confirmation let’s see how it looks in another astronomical software – Cartes du Ciel Sky Charts v.4.31 (Pic. 5). 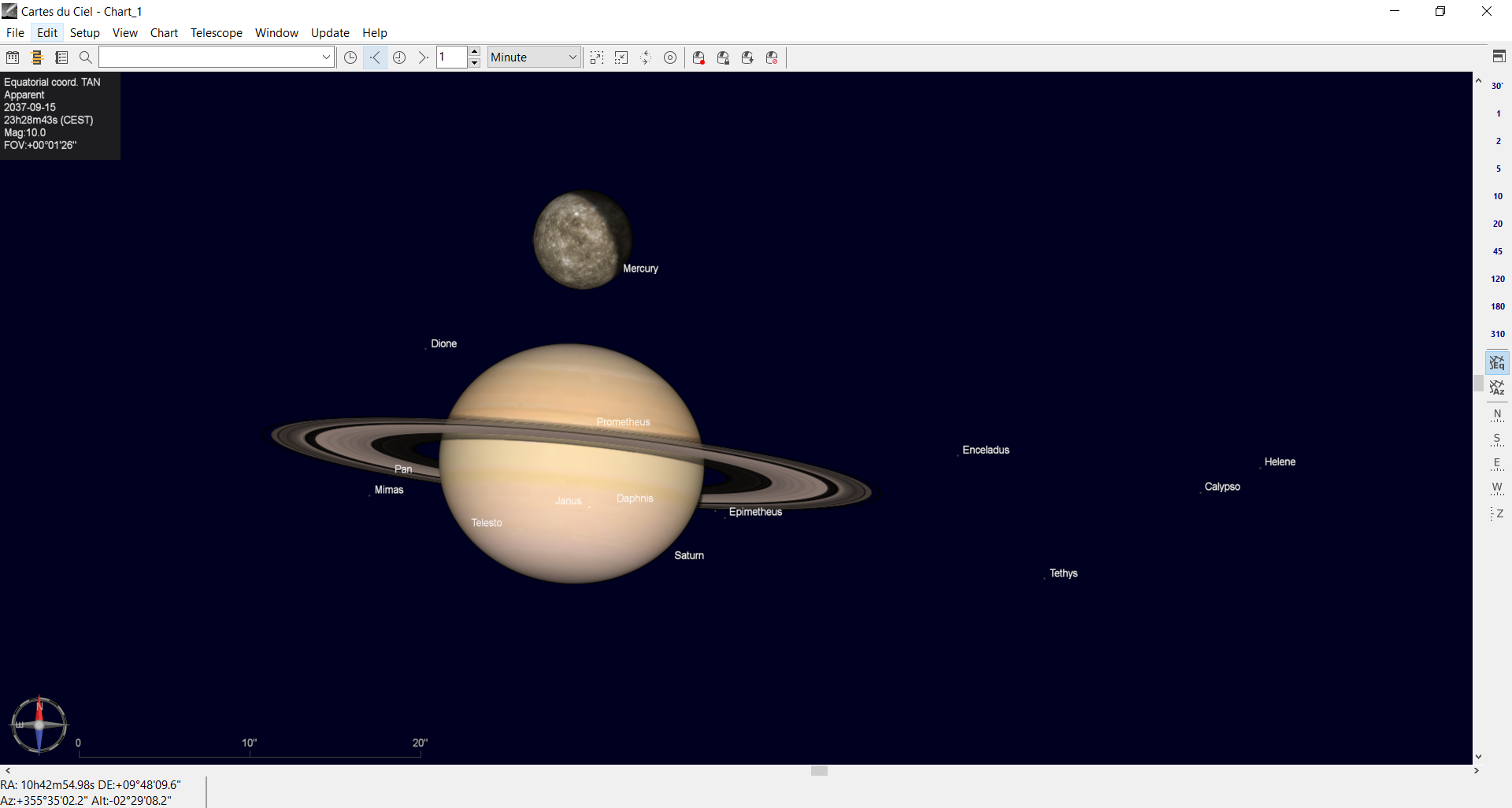 Pic. 5 The great conjunction of Mercury and Saturn on September 15th, 2037 circumstances for the Arctic region as seen in Cartes du Ciel Sky Charts v.4.31 software.

We can also confirm these circumstances with the best dedicated web-based tool, which is NASA’s JPL HORIZONS Web Interface, where we can calculate the Solar System ephemeris.
If you prefer something easier to check all great conjunctions or occultations of these planets, you can check the list of mutual occultations of planets between 2000 BC and 3000 AD.

Concluding, treat this article as a warning before you start to plan or visualize some occultations of celestial bodies. It won’t work, unfortunately, at least by now until the nearest big upgrade.  I am grateful to this Facebook group, which members made me aware of the mistake in this article. I trusted the Stellarium-web in 100% and haven’t compared it with other sources. It was an omission that won’t happen again.