Posted by Krukarius on 9 August 2018 0 Comments

I was looking forward to this perfect and warm Friday evening more because of an extremely long dry spell in east England, which lasted from mid-June. Unfortunately, the weather forecasts for Friday 27th were not favourable. The cold front was predicted, although according to some services rain was appear to occur around midnight. If so it could give me a perfect occasion to see the eclipsed moonrise and assess the moment when the reddish Moon will become visible in the twilight sky. I was aware of changing the visibility conditions, typical for the front-bearing weather when the sky becomes hazier. In this event, the red Moon could not be visible at the same moment as normal. Anyway, the option to see a red moonrise from the British Isles was a unique occasion,  thereby the awaiting was really nervous. I was checking the numerical weather forecast since Wednesday, but they were getting worse as Friday approached. I was hoping that this weather prediction will be delayed and I will experience this unique event eventually. 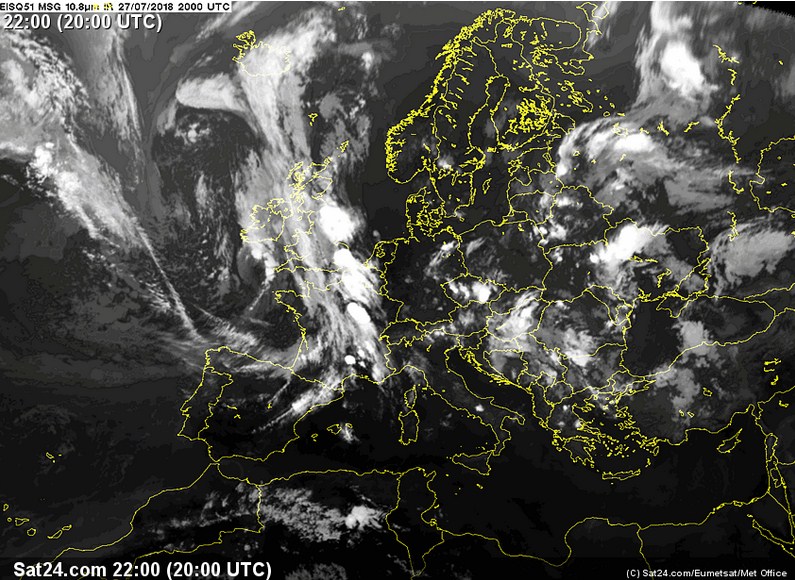 Unfortunately, the worst option happened and on Friday 27th around 5pm started raining. Between the thunderstorms passing above the Cambridgeshire area, I still could see the clear section of the eastern and southeastern sky, which kept me in hope of seeing at least a bit of a lunar eclipse. I even considered going to the Great Yarmouth coast to try to catch some clear sky. Moonrise there occurred 5min earlier than in Cambridge, according to the forecast rain was about to come around midnight. Finally, I rejected this idea. Pic. 3 The elongated clear section of the sky above the eastern horizon, whereas Cambridge, was facing a series of thunderstorms since 5pm.

After the last thunderstorm, I packed my gear and set on the observation point – Little Trees Hill, from where the southeastern horizon is clearly visible. Being en route I was wondering why I am going there when there is no clear sky on the eastern side. Moreover, huge thunderstorms occurred there. I thought that maybe between these thundery clouds something even for a while will be visible.

When I came to the hilltop I saw that I am not alone. There were a few people awaiting the same as me for some clear sections of the sky on the southeastern horizon. 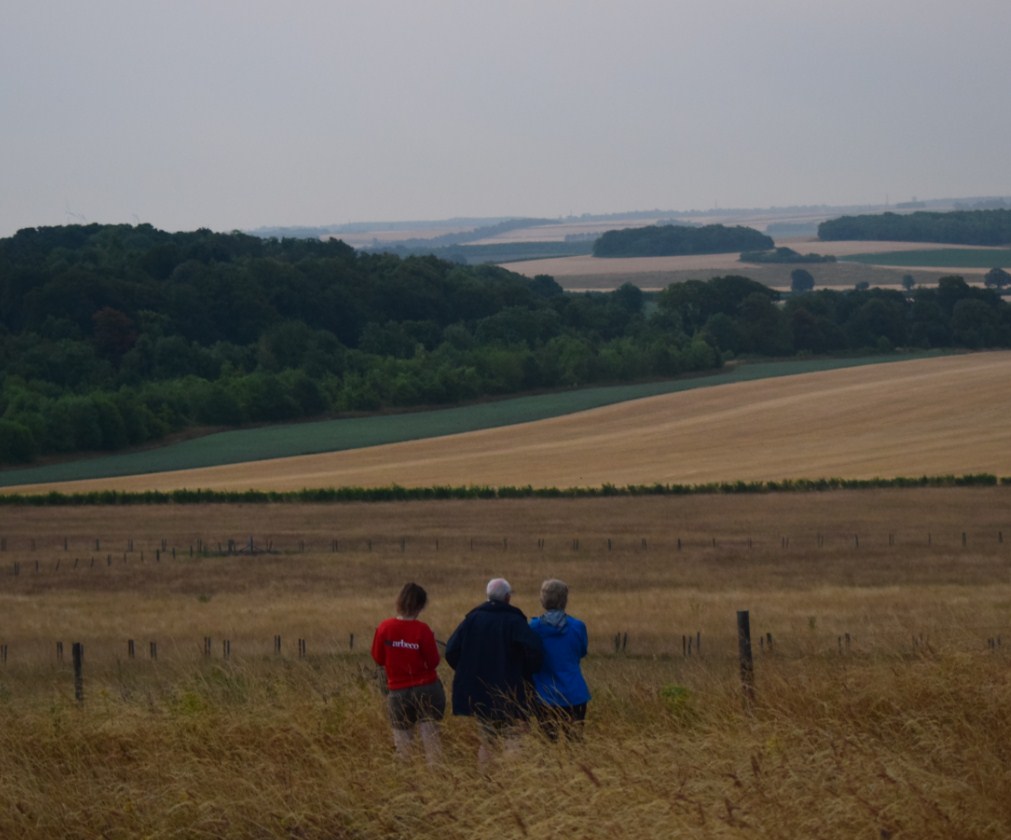 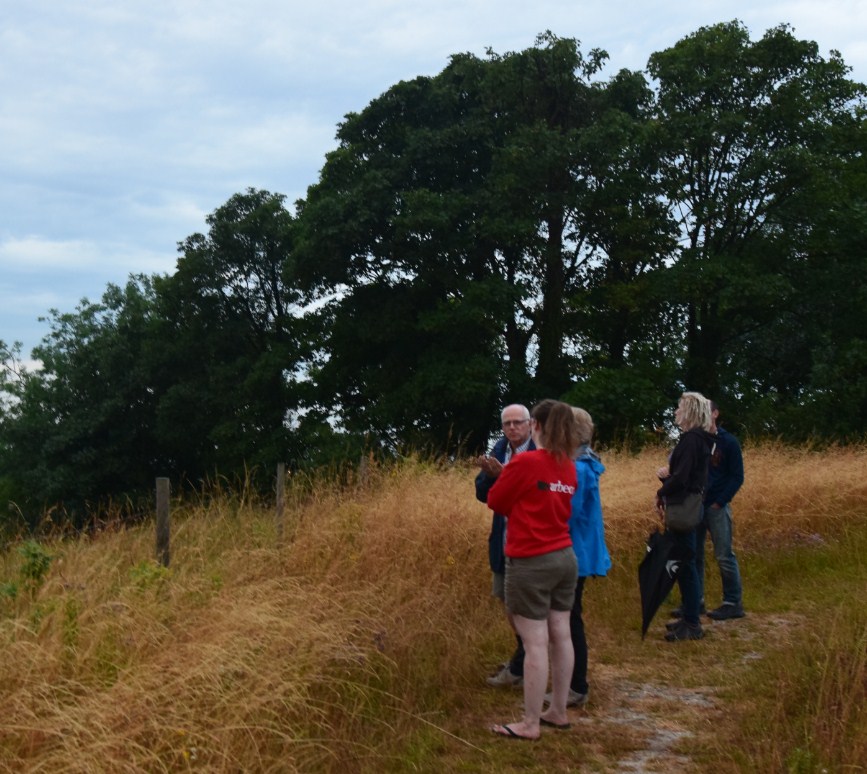 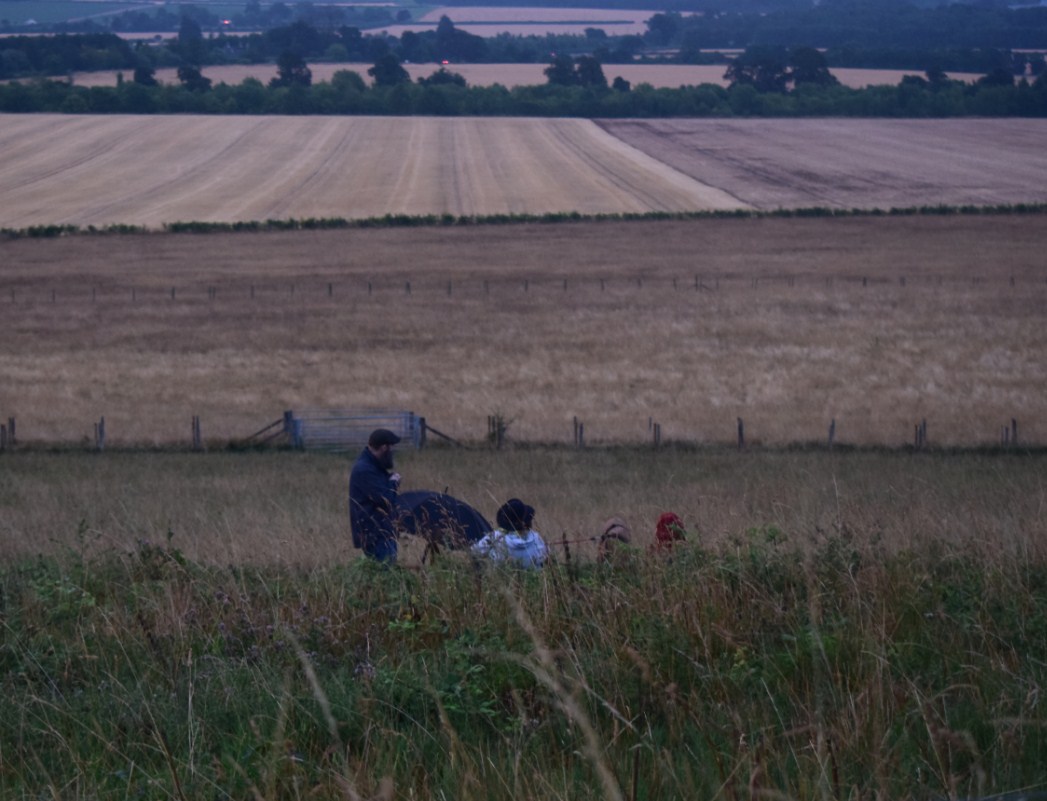 Pic. 4 – 6 People awaiting in hope, that the weather conditions will improve a bit later giving the opportunity to watch the longest lunar eclipse in the XXIst century.

I asked one family and they said to me that is standing here in the hope to see eclipsed Moon. I said: “The Moonrise should be visible on the azimuth 122deg”. A lady answered: “That’s very precisely”.  They have marvelled at my big knowledge of this phenomenon. I helped their daughter to install the weather app (Pic. 2), thenceforth all of us could see how things stand. It was not looking good because the frontal thunderstorms covered all of the East Anglia regions up to the North Seashore. 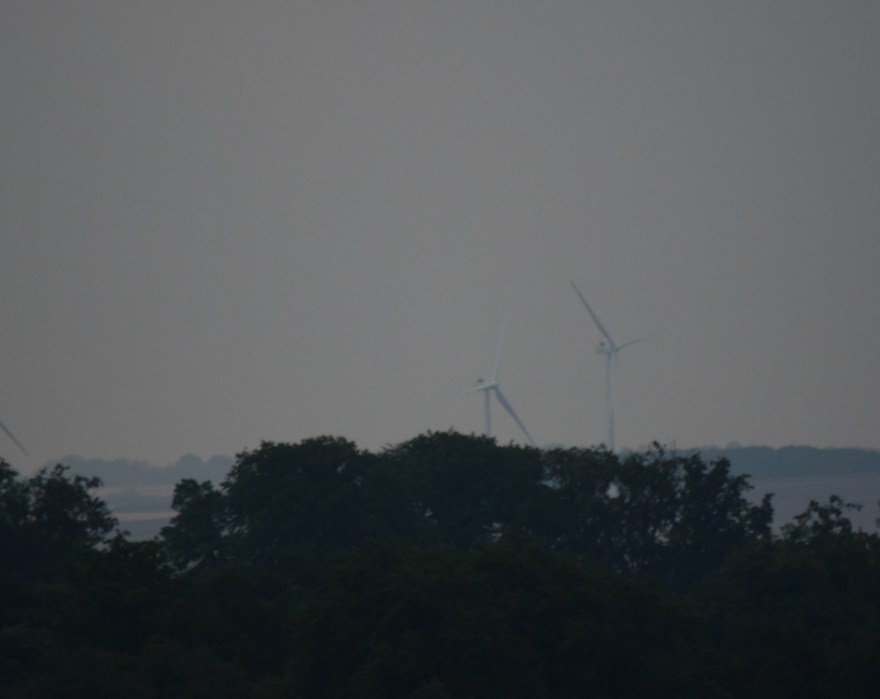 Pic. 7 View on the Azimuth 122deg, pointed by timeanddate.com as a moonrise above Cambridge at 20:51 UTC+1. Unfortunately no chance at all. 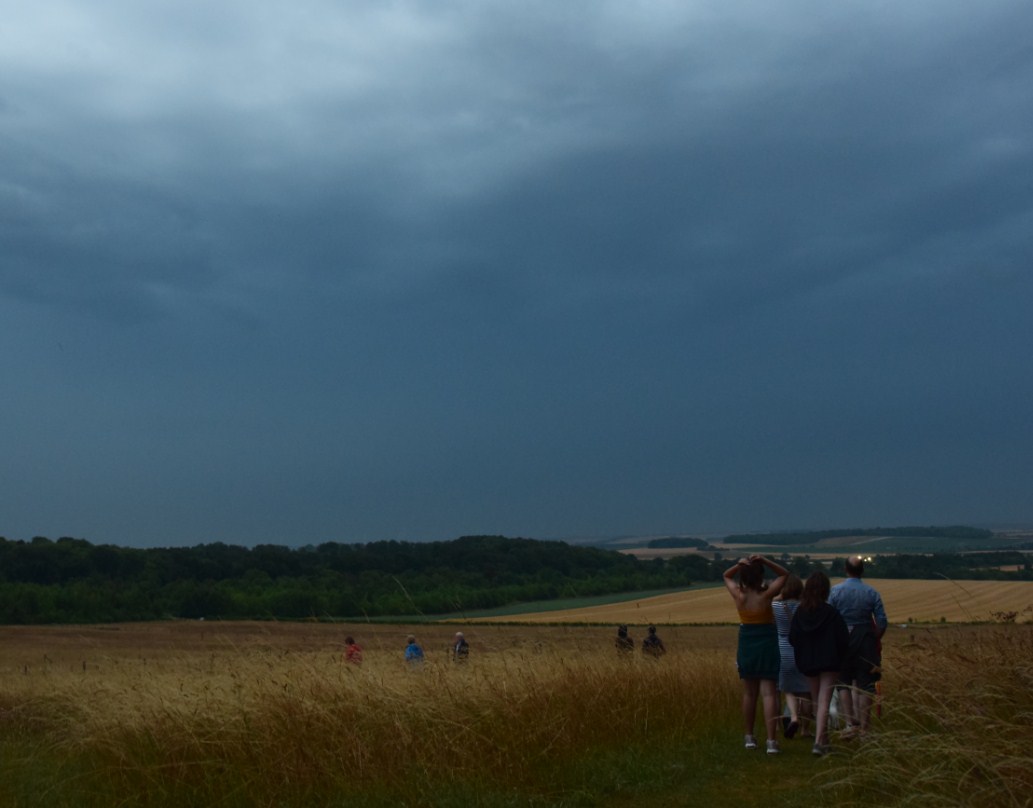 We were looking towards the south, where the sky appeared to be brighter. I could have waited till the weather improved, but after a few minutes, it started to rain again. I decided to back home very disappointed. Other parties stayed there.

After all, I carried out the remote observation of this total lunar eclipse, which was a perfect alternative in this situation. I could see the eclipsed Moon from a few live streams, however, I found also another way to observe this phenomenon. 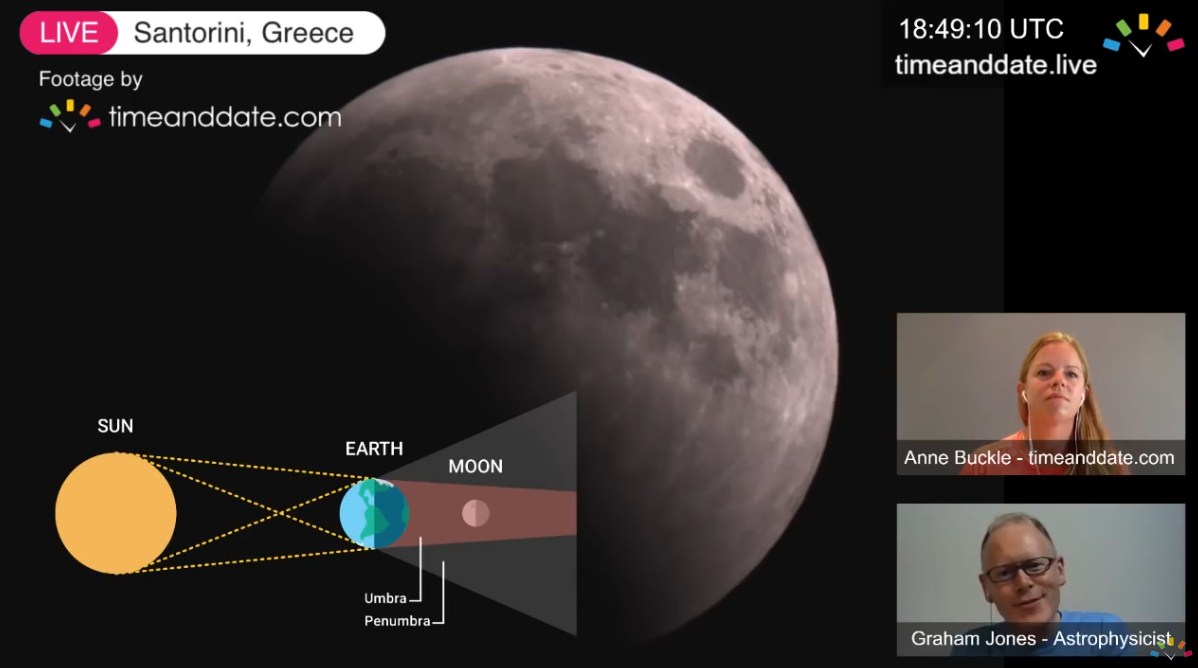 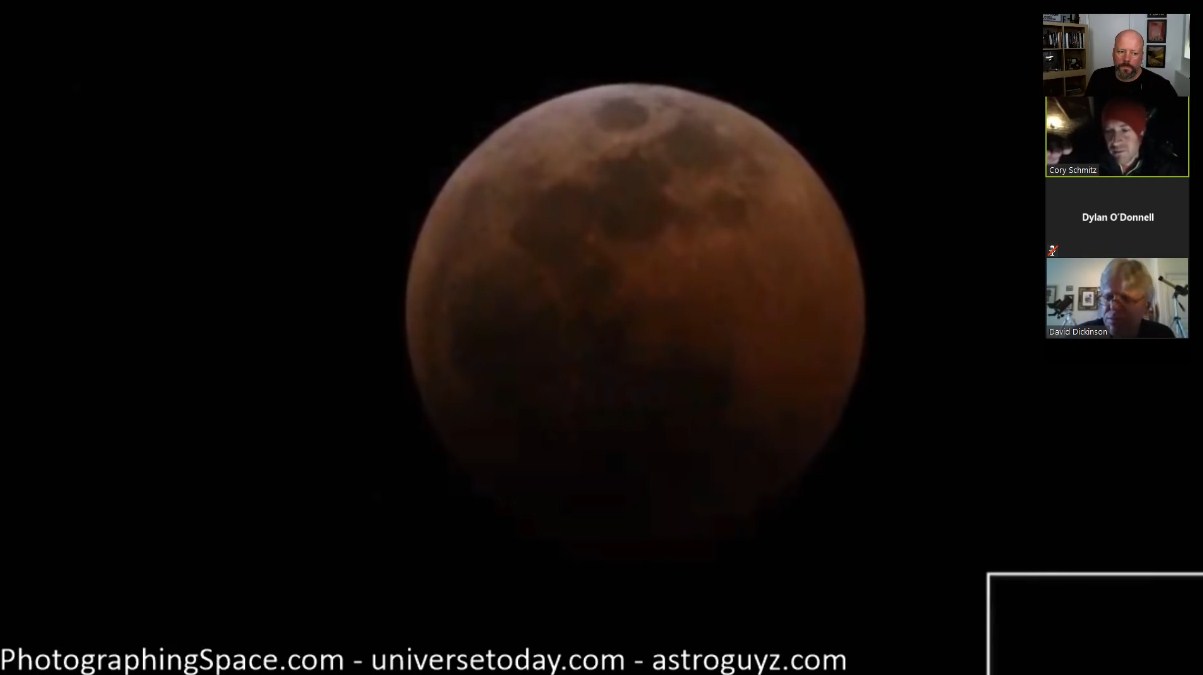 Pic. 9, 10 An example of the total lunar eclipse live stream. You can see eclipsed Moon from a few perspectives around the Globe, however, the lunar disk itself will not be free of gadgets, links, etc. otherwise the Moon will look smaller. 9 – Timeanddate.com, 10 – PhotographingSpace.com. There were another few streams to choose from.

I used high-quality live web cameras located in a few places in Europe and one in Dubai. These cameras including archive images up to 1 month before helped me to collect the data from the time when I was out of my laptop. These 5 minutes intervals combined with high ISO sensitivity brought amazing results for me. Because I have gathered the data from different parts of the continent I had various sky conditions.

There were also different factors, that played a leading role in this observation. I have put all of them below:

Now I would like to present the local circumstances in the places, where the total lunar eclipse was observed:

The main observation of the total lunar eclipse comes from two webcams: Venice and Dubai. In both cases, I focused on illumination level changes. The period of observation has been divided into 3 sections: totality, partiality and penumbral. The illumination during totality has been recorded in Venice. Next, the picture was modified with Photoshop Express, where was found that since mid-eclipse to U3 contact the illumination grew marginally, especially before the end of totality, which is clearly understandable.

The Moon itself presented poorly in the webcam view, although the umbra movement across the lunar disk was noticeable. In extreme moments of the totality, the lunar disk appeared to look brighter especially on the side closer to umbral contact. The upper edge of the lunar disk remained the brightest throughout the entire totality because the Moon was not dipped in Earth’s umbra enough.
In order to enhance the colours and roughly point out the moments of the illumination change, I have modified these photos in the Adobe Photoshop package.

The partial phase seems to be the most interesting period of observation from the webcam point of view. The illumination change is the most noticeable at this time. The lunar disk turns from red (with visible dark spots – seas) to a shiny big point. When lunar obscuration was around 75% the reflected moonlight started to be seen on the seawater surface.

The penumbral phase marked a significant brightness growth just after the U4 contact. The illumination difference fainted as the penumbral phase progressed bringing the full Moon conditions around 30 mins before the end of the eclipse. It has been verified clearly on the modified image.

Dubai webcam has been located in different conditions. There is high light pollution and not the sea in the frame. Despite these factors, the output was surprisingly good. I could spot increasing illumination, especially on the altocumulus clouds just after the U3 contact. Interestingly is also the fact, the sequence captured at the U3 moment looks slightly brighter than previous ones. The modified photo clarifies this issue, which could be used by the change of local atmospheric conditions (some dusty air movements or increasing cloudiness, that reflected the light glow). Therefore the sequence from 2:05am and 2.10am looks more yellowish. In the shot from 2.15, a faint whitish moonlight becomes visible.

Pic. 25, 26 Total lunar eclipses seen in Dubai. End of totality and entire partial phase with a lunar disk out of the camera frame, however, the luminance changes have been noticed. 25 – original photo sequence, 26 – modified in Adobe Photoshop Express. Click to enlarge.

The penumbral phase in Dubai webcam was not clearly visible. Firstly the Moon was not visible entirely in the frame, hence the brightening of the top of the sequences was caused by the approaching of the lunar disk towards the camera. Secondly, as Moon moved lower in the sky, moonlight became fainter due to extremely dusty conditions. In the outcome, the lunar disk during P4 contact was quite fuzzy and not as bright as appeared to be at that time.

So, the observation has been done. In the meantime in Cambridge… 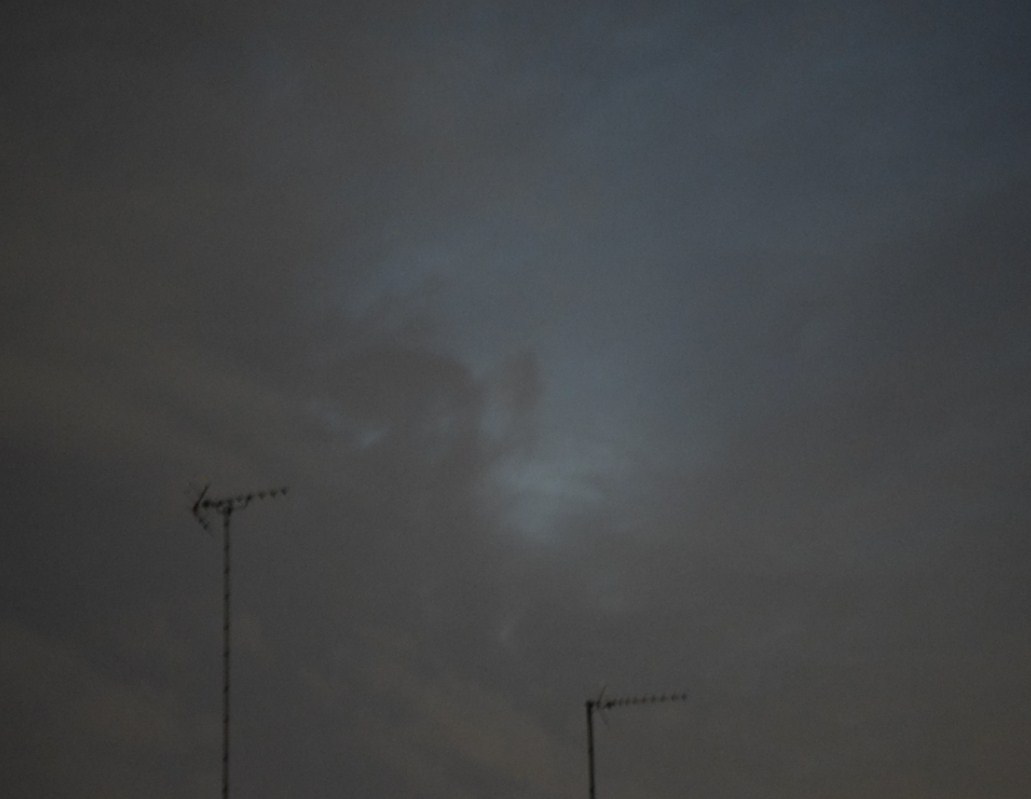 Pic. 30 Partially eclipsed Moon is just behind the receding clouds.

In the finish, I can say, that the remote observation of a lunar eclipse is a perfect choice for someone, who lives in a different part of the Globe, where the eclipse is invisible or when the weather is not good enough.